The AGP (Art Graphique & Patrimoine) team joined forces with FARO to carry out an emergency 3D digital mapping initiative to help save Notre Dame. Conducted in just one day, this initiative involved carrying out a highly accurate 3D survey of the building in its post-fire state in order to assess the extent of the damage.

The data collected during these initial post-disaster 3D surveys using advanced laser scanners from the FARO Focus S series can now be compared to AGP’s data from before the fire, therefore providing useful information for the reconstruction process and ongoing investigation. 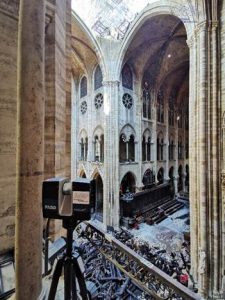 All of this data will allow those involved in the reconstruction process to access a reliable body of technical documents, 3D measurements and images. The purpose of the initiative, known as ‘Operation Commando’, was to digitally map the entire cathedral, especially the parts that were most severely damaged.

A week’s worth of work was accomplished in just one day thanks to the hard work of the AGP team and the FARO laser scanners. Taking into account the exceptional circumstances, FARO loaned its Focus S laser scanners to the 3D digital mapping experts free of charge: this equipment has been used by AGP for more than 15 years and is perfectly suited for surveying our architectural heritage.

During this one-day operation, colour scans were taken from more than 300 positions, amounting to approximately 30 to 40 billion points. The inaccessible parts of the cathedral were mapped by means of photogrammetry using a drone.

This data will be used to assess the damage caused by the fire to ascertain which parts are most severely affected. This first stage of the reconstruction process is essential to saving the cathedral. The teams are now working to process this mass of data (this involves assembling and consolidating the scans to form a complete point cloud, colourisation, and comparison with the pre-existing data).