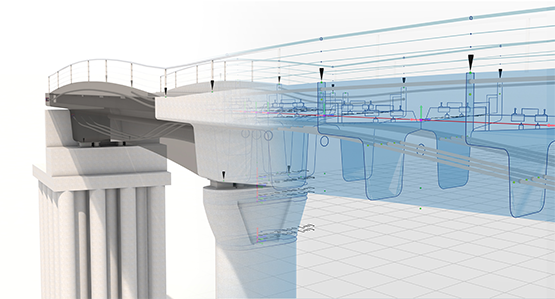 One year on from its first release, a host of new capabilities have been added to expand Allplan Bridge

A year on from its initial launch in the bridge sector, the capabilities of Allplan Bridge are being further expanded by a new release that contains important functions for smooth processes, such as the definition of the construction sequence, effortless positioning of standardised and repetitive profiles and numerous other detail improvements.

The program, which was first launched in 2018, was conceived as a comprehensive BIM tool for bridge construction, supports engineers in all planning phases, from the initial concept to construction. It was quickly accepted in the industry, and the second release in the autumn of 2018 followed suit, with the main new feature being its ability to address prestressed structures effectively and comprehensively.

With this functionality, it is easy to model a wide range of types of pre-stressing: with immediate or later bond, internal and external, longitudinal, transverse and vertical, as well as with non-standard geometry.

Based on user-defined 3D points, the program automatically generates the geometry of a tendon along the bridge structure. Each 3D tendon point is specified by the position along the axis, and the position in the cross-section in relation to a reference point. In addition, direction angle and curvature radius of the tendon can be specified in each point.

Integration of the fourth dimension

In a similar vein, the most recent version, which was released in April, contains several interesting new functions that, by themselves, offer substantial added value for the user. In Allplan Bridge 2019-1, it is now possible for the first time to map the construction process in a 4D model. The construction plan is first divided into several construction phases and then into individual tasks such as concrete hardening, tendon stressing or activating the self-weight. The corresponding components are interactively assigned to the tasks. In this way, the temporal dimension is linked to the structure. With this information, the construction process can be graphically visualised.

With Allplan Bridge 2019-1, it is also possible to create several different construction plans for the same bridge for a variant comparison. The result is a reliable parametric 4D bridge model. Once the construction is completed in Allplan Bridge, the model is transferred to Allplan Engineering, where further steps such as detailing, reinforcement and plan creation are carried out.