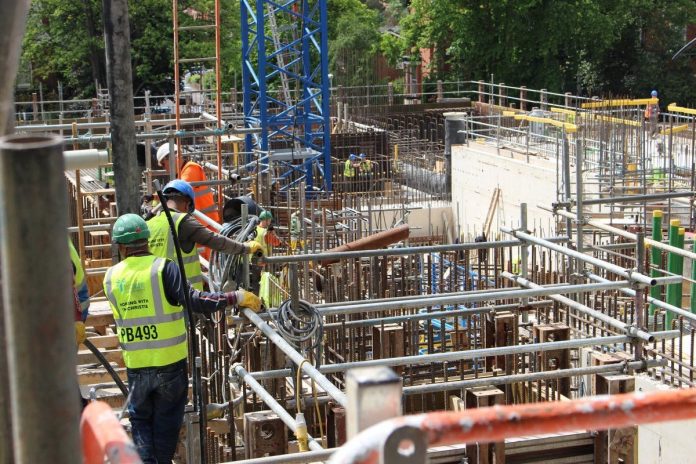 When Interserve won the contract to build the £90m Manchester Proton Beam Therapy (PBT) Unit at The Christie Hospital in Manchester, it knew that such a ground-breaking facility warranted the use of innovative technology and showcased its commitment to BIM at every stage of the development.

The new Manchester Proton Beam Therapy (MPBT) facility will enable hundreds of cancer patients access to a relatively new form of treatment capable of targeting hard to reach cancers without damaging surrounding healthy cells. Proton beam therapy is talked about often, but a lack of UK facilities has meant the NHS frequently has to fund treatment overseas. Alongside a new 360,000sqft hospital, near Tottenham Court Road, London, the Manchester facility will ensure far more patients can access proton beam radiography while also boosting UK research into the treatment.

Work on the five-storey building began in May 2015 and one of the first challenges to overcome was undertaking the MEP layout accurately, efficiently and in accordance with the UK’s Level 2 BIM mandate for publically procured projects, as enforced in April 2016. This challenge was intensified because of the stringent radiation protection requirements essential to building a safe and effective proton beam therapy facility.

To Nigel McClarence, Senior Project Manager at Interserve Engineering Services – who has responsibility for the project’s MEP installation/layout – the Trimble Robotic Total Station (RTS) seemed a sound proposition as a means to meet the job’s unique challenges. Keen to see how the RTS could help revolutionise layout, McClarence contacted the company’s MEP Engineering Division and requested a demo.

“Chris Quirk, from Trimble MEP, came up and did the demo in a converted cellar in The Christie Charity,” explained McClarence.

“The RTS was dimensioning ductwork hanger positions onto the ceiling, and I was sold straight away on that with regards to being able to convert the model into real time hanger positions. One of our base build principles at Interserve Engineering Services is that we use corridor modules so I knew we would have thousands of hangers to mark out on the project” he said.

“We’ve partnered with Arup on MEP and civil & structural, and this model has all the structural in there, but it’s also got all the embedded MEP services. You can pick out corridor modules, and the associated hangers are modelled too. We have an 80m long primary corridor. I could see the benefit in using the Trimble RTS purely for marking out.”

However, it soon became clear that the specific requirements dictated by the building’s eventual function meant the Trimble RTS proved priceless elsewhere too.

“There’s approximately 20,000 linear metres of embedded services throughout the project. Conduit, pipework and an embedded trench which runs down the beam line where the proton beam is delivered,” he explained.

“One of the complexities is the size of the bunker, and the radiation protection required to the bunker so the walls are at least 2.5 m thick. Consequently, to build that bunker involves around 120 separate pours over more than a 12 month period. Each pour has its own embedded services drawing so that you can start seeing all the embedded services in the BIM model,” he said.

“Before we invested in the Trimble RTS I was thinking about using it mostly regarding ceiling mounted services/hangers as per Chris’ demo. However, on this project, there are so many complexities: services within concrete that are in mid-air that needed to be mm perfect, vertically/longitudinally, etc. This prompted me to ask Trimble MEP whether they’d ever used an RTS to mark out embedded services. When Chris said, yes, he had and sent a couple of snaps over that was the trigger for us to think we could and should give it a try.”

For McClarence of Interserve Engineering Services, one of the key factors in using the RTS successfully was the training and consultation support he received from the Trimble MEP team. At each step of the way, Trimble MEP partnered with Interserve Engineering Services to ensure that obstacles were overcome and opportunities maximised throughout the project. Just one of the many examples of this collaborative relationship proving highly successful was immediately after the first pour, which has the tower crane in it.

McClarence explains: “What Trimble MEP spotted was that the tower crane in the first pour would be a really good starter point for setting out with the Trimble RTS. We also noticed that not every pour would have that same fix point. Using the tower crane as a fixed point was a good start and that initial training was excellent because it showed us that without these fixed positions you were going to require a totally different solution.

“Later we set out the fourth gantry using the crane base which the Trimble MEP guys had used as their fixed point. Further down those fixed points aren’t there so Trimble MEP drew the points in for us. We went out and tested it, and we got the green light from the robot, which set the wheels rolling for us. We then knew that we were going to be able to use the RTS to set out all these conduits and embedded items,” he said.

Although The Christie Proton Beam, located on the site formerly occupied by the Young Oncology Unit located on Oak Road, is a bit of a one-off regarding scale and special requirements, McClarence of Interserve Engineering Services knows there will be other projects that have embedded services, albeit probably on a smaller scale. He also believes the use of the Trimble RTS has set a benchmark for the business.

“Going from thinking we were only going to use the RTS for setting out ceilings to then utilising it for embedding services was a massive leap and, were anyone to ask if we could have done it without, I’d have to say no. Or not in the same time at least.

“Regarding manpower, the RTS also allows us to keep the head count down on site because we now only have one/two persons undertaking all the setting out. On the first few occasions/trials, three or four operatives worked together because it was a new system, but this can now often be completed solo.  This is very important due to the logistics/complexities of actually getting into a concrete pour to mark out the associated services.

“Trimble MEP helped all the way through sometimes producing a drawing and getting it back to us within half an hour, just because it was beyond our skill set at that point in time. However, it’s only taken us six months to be confident in doing everything entirely solo, and now just one person does the drawing/tablet loading too,” he said.

“The whole experience has been great. The support from Trimble MEP was second to none and finding a method that no one else knew was rewarding. I suppose we might have been able to manage without the RTS but only with loads of guys with tape measures. Interserve Engineering Services were determined to keep the numbers down here – we’ve got limited parking, minimal on-site storage and it’s a tight site. The Trimble RTS was an absolute asset here.”

For Interserve Engineering Services, the Trimble RTS also proved invaluable in ensuring The Christies Hospital is a flagship BIM project, from the foundations up.

“I would never want to build a project without BIM ever again,” enthused McClarence.

“This model sits at LOD 400 so every element in there is real time against what we’ve actually procured. For instance, we’re using a new thin wall stainless steel product, and all the pipework is modelled in it. So the fact you’ve built the job digitally and know it fits before you walk out there is just so valuable”.

Most MEP companies are coming online BIM wise. I know some are more advanced than others. With Interserve Engineering Services engineers, nine times out of ten you look at their screen and they’ve got their model open because they’re stood in a room looking at whether there are clashes/installation detail. It’s great to see,” he sums up.

The Trimble RTS has proved such a vital tool during this project, and it’s a great piece of equipment for anyone in the MEP sector looking to embrace BIM as part of how their business grows and develops. Interserve Engineering Services are proud to partner with Trimble and SysQue and demonstrate this with multi-stations across regional UK activities and sites, including the build of the new Interserve Headquarters within the West Midlands.

To read more about BIM and the MEP sector, download your free issue of Trimble MEP Connects magazine.