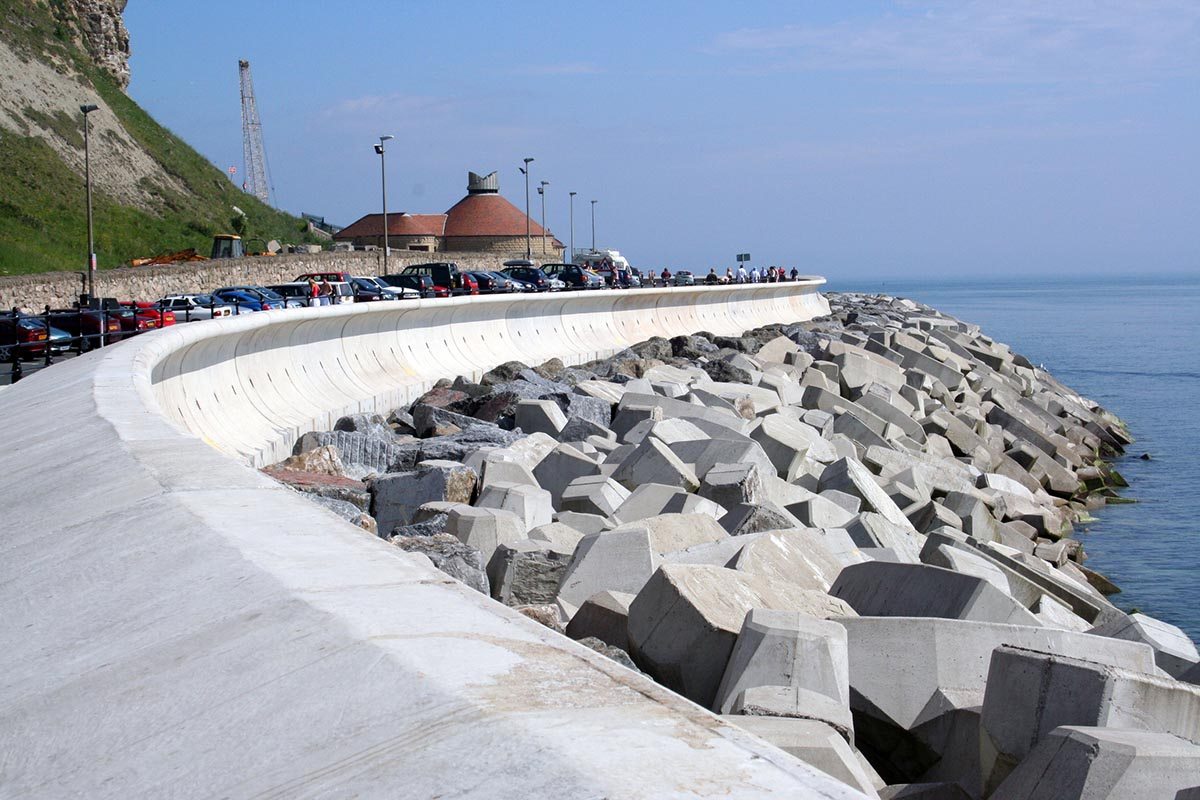 In the first of a series of interviews with Carl Green, head of engineering services for Wyre Council, we follow the progress throughout the construction and operation of the Fylde Peninsula Coastal Programme – the world’s first BIM coastal defence scheme

The Fylde Peninsula Coastal Programme (FPCP) is a partnership between Wyre Council, Blackpool Council, Fylde Council and the Environment Agency.

It is responsible for managing the Fylde Peninsula’s coastline and reducing risk of flooding to people and the developed, historic and natural environments. The scheme currently covers two areas, Rossall and Anchorsholme.

The Rossall area is situated on the North West coast between Cleveleys and Fleetwood in the Wyre Council area and is subjected to some of the strongest currents and highest waves on the coastline.

The flood defences are old and could fail during a major storm, resulting in significant flooding to low lying properties in the area. The most recent major flood events occurred in 1927, which resulted in the deaths of six people, and 1977 when over 1,800 properties flooded following a breach of the sea defences.

Similarly, in the Anchorsholme area, situated at the northern boundary of Blackpool Council, major flooding occurred in 1927 and 1977. Flooding to the promenade, highway and tramway occurs regularly during storms when waves overtop the existing sea defences, resulting in temporary road closures. A United Utilities pumping station forms part of the sea wall at Anchorsholme, which means Anchorsholme and parts of Rossall are also at risk of sewerage flooding.

The new defences will protect 12,000 properties in total – 7500 in Rossall and 4500 in Anchorsholme plus critical drainage and transport infrastructure. Extensive public consultation has been undertaken and a variety of public feedback has been considered in the development of both schemes. One clear underlying theme was evident throughout the consultation process; people just want to feel that they, and their properties, are safe.

Carl Green, Head of Engineering Services for Wyre Council, is leading the programme. Carl has over 20 years’ experience in the design, construction, operation and maintenance of major civil and coastal engineering projects around the UK.

The project began in a pre-BIM world, where Green had seen contracts signed before relevant sections of the Government strategy had been released, particularly PAS1192/3. The competency of contractors to understand 3D modelling and information was key. Despite these competencies, it was clear that applying a nascent methodology to a ‘world first’ wouldn’t be without issues, and it was this under- standing that led to Carl’s structured approach to maximising the benefits of BIM.

“When we started the process, we thought long and hard about the challenges that we face when looking after the current sea defences. The main issue is that the information in our archives wasn’t complete. Some information had been lost, some had been borrowed over the years and not returned, and some wasn’t even captured in the first place.

“This made it more difficult to completely understand exactly how the current defences were constructed, what maintenance had been undertaken and why and even where exactly the sewerage outfalls were. I was determined that the next generation of people who would be renewing the defences in 50 years’ time wouldn’t face the same challenges as my team”.

Carl mentioned that one of the key challenges was ensuring that the right data was captured rather than all data.

“The natural view of many in the team was to attempt to capture all of the data possible. It quickly became clear that on a programme of this size, this approach would be unsuccessful due to the sheer volumes of data that could be generated.

“As a group, we looked at our own requirements during the pre-design, design, construction and operational phases and decided on the data that we would need to capture at each stage to meet these requirements, and optimise asset management and minimise maintenance costs throughout the lifecycle of the project.

“We then formalised this in a document to use as a template to ensure and verify that we have captured the required information. What was most interesting is how different the new EIR was from our initial Employers Information Requirement documentation. (EIR)”.

The next key challenge was software. There are a multitude of design packages, and GIS packages, maintenance packages as well as existing council software and different packages from internal and external supply chain organisations. The new EIR didn’t only include 3D models and traditional design data. It also included photographs, spreadsheets, PDFs, MS Office, scanned paper documents, video, audio and even laser scan files. Carl explained how he and the team overcame this challenge:

“We were initially worried about how to make best use of the data with all of the different tools that were being used on the programme. It quickly became apparent that we needed to identify a simple to use tool that enables us to use and capture information throughout the construction and operational processes that ideally can be used in the field.

“We managed to find a tool called Sitedesk www.sitedeskconstruct.com which can handle large complicated models on mobile devices as well as desktops, all of the file formats and versions that we require. Sitedesk also allows all members of the team to use existing documentation and workflows if required. We chose Sitedesk because it makes it simple to take advantage of the whole life cost benefits of BIM without the exposure to high hardware, software or integration costs”.

For Green, the biggest lesson learned so far is to be more prescriptive in terms of the desired whole life outcomes for the asset. This process is the best way to ensure that the EIR correctly informs and defines the quantity and quality of the information that is actually required to manage the construction and operation of the asset.

Next time we will evaluate progress against expectations…