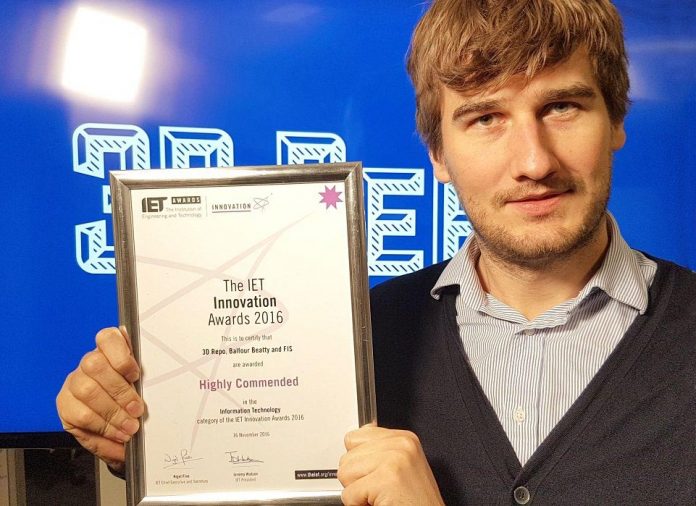 BIM software created by 3D Repo has been recognised for being innovative.

3D Repo is a spinout of UCL PLC. The software is a multi-award winning open source for building information modelling (BIM) in the cloud. It enables architects, consultants and contractors to access an encrypted online repository to see each project stage virtually, thus removing the need to share massive proprietary files, which can be costly and time consuming.

Now, the software has been recognised for its innovation by the Institution of Engineering and Technology (IET). The Bid4Free Online Platform was Highly Commended in the Information Technology category at the 2016 IET Innovation Awards.

The event was hosted on 16 November and saw over 450 attendees at the black tie dinner event. It was hosted by TV presenter and adventurer Rob Bell. The submission from 3D Repo was one of 300 other entries put forward. Some 25 countries submitted entries.

3D Repo’s Bid4Free was developed in collaboration with Balfour Beatty and the Finishes and Interiors Sector (FIS). It is so successful because it cuts out the high multi-party costs of tendering by introducing an innovative cloud-based software as a service (SaaS) 3D BIM platform that reduces time and cost spent on the tender process.

3D Repo’s CEO Dr Jozef Dobos said: “It was a tremendous accolade to be highly commended at the IET Innovation Awards.  We have developed a novel SaaS solution to the construction B2B tendering problem.

“Our Bid4Free solution is based on the existing multi-award winning open source 3D Repo framework developed at University College London, which runs in web browsers on desktops, tablets and mobiles.

“Importantly it is free to use and saves considerable costs as there is no need for software plug-ins, proprietary licences, firewall exceptions or the latest hardware.

“Instead of charging for costly proprietary software licenses, 3D Repo offers a unique open source web-based system that provides a free to use online tendering platform.

“Tier 1 contractors like Balfour Beatty are able to post their BIM projects securely. The subcontractors can then preview the projects virtually in web browsers and exchange Requests for Information (RFIs) free of charge.”