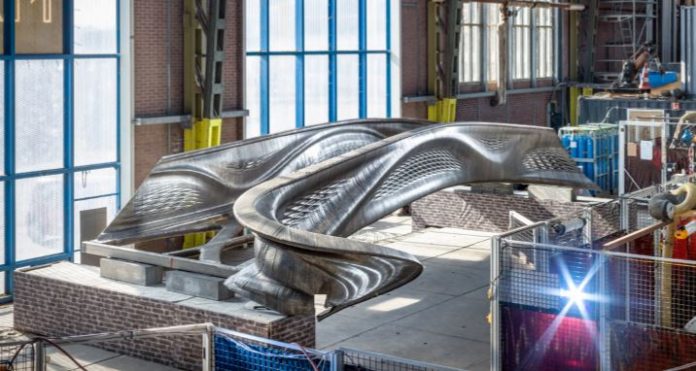 They also helped to verify if the bridge structure was built according to the design 3D model using FARO BuildIt Construction software.

If you’ve been following the topic of 3D printing you’ll have no doubt seen that we’ve moved on from melted plastic squeezed through nozzles over many hours to produce rough-edged trinkets to things that are much more useful.

In medical terms we can now print custom-fit prosthetic parts or even internal bone repairs/replacement whereby the material characteristics improve ‘acceptance’ of the foreign object allowing bone and tissue to fuse to the part, increasing strength of the bond.

Seeking the ultimate poster project to showcase all facets of technology, MX3D and main sponsor Autodesk concluded that a bridge over a canal in Amsterdam would be “a fantastic metaphor for connecting the technology of the future with the beautiful city’s past.”

Using a process of additive manufacturing that uses welding technology, robotic arms and computational design software, MX3D are extending the use of 3D printing to ‘real-world’, practical ‘built environment’ uses.

Upon completion, the bridge will span the Oudezijds Achterburgwal, one of the oldest and most famous canals in Amsterdam. The printing process was finished in spring 2018 and placement of the bridge is predicted for end 2019.

Most reports and stories you may have read about this historic project, relate to the ingenious design approach and new methodologies of co-creating with industry-leading computational design, robotic and material experts.

Autodesk’s Tristan Randall, Imperial College London’s Dr Craig Buchanan and FARO’s David Southam take a look at the role of laser scanning in the delivery and structural testing of the fabricated bridge and what insight it can offer us in the future.

In many instances site surveys and investigations highlight the differences between what’s typically shown on construction drawings or models and the reality of what exists ‘out there’ in the real world… and it was no different with this ground-breaking project.

Even considering the technological advances of this project, it wasn’t until fairly late in the design process that the final bridge location was chosen and a laser survey undertaken.

In MX3D’s words the “highly detailed 3D scan demonstrated that the bridgeheads are not entirely parallel” but rather than modify the bridge head’s original stonework to suit the bridge, the company chose to modify the bridge design to an asymmetrical plan form. Now the form of the bridge caters for its existing context sensitively, something achieved through harmony between technology and design ethos.

Randall, says: “the performance of these structures is somewhat of a mystery”; in terms of structural validation, we are entering an era of construction where new techniques or variations of ‘off-site fabrication’ are leading to more advanced testing methods being required.

Sample testing of the manufacturing process is being undertaken by the Steel Structures Research Group from Imperial College London (ICL), under the lead of Professor Leroy Gardner and Dr Craig Buchanan. Their aims are to determine the functional properties and structural behaviour of the printed material.

With the majority of the bridge left in its primary finish (its build-up of layers of welded material will simply be brushed clean of loose fabrication material) the challenge for ICL was to accurately measure the undulating surface topography alongside capturing thicknesses, areas, diameters and volumes.

With a series of small plates and small cross-sections to measure, Buchanan considered X-ray scanning but this proved impractical due to the thickness of the material. They then discovered the FARO ScanArm. Buchanan, says: “it worked fantastically and without it we literally couldn’t undertake this task. The only practical way to measure the samples was to use the FARO ScanArm.”

Once measured, the ICL team are undertaking destructive testing that feeds into the computer model generated using the FARO ScanArm data. This is then analysed to determine material properties and failure loads. Whilst testing is still in progress, initial result seem to be positive with Buchanan commenting “the predicted behaviour and tested behaviour align very well”.

In November 2017 the ICL team visited Amsterdam to undertake further load tests and will return upon completion as part of the ongoing testing – put simply, Buchanan, added: “from the beginning of our work with the Scan Arm in London we realised that without it, we simply couldn’t have the accuracy we have, we would have made a lot of assumptions which isn’t ideal”.

Continuing Autodesk’s involvement, in March 2018, Randall returned to Amsterdam to measure the fabrication as it currently stands (planned to be half complete). Randall hopes to return twice more before it is complete and again once it is installed in-situ.

Whilst MX3D had originally prepared a number of samples using the exact same additive manufacturing technique for ICL, the current phase is to measure the bridge as it is fabricated.

Again, being measured and captured using laser scanning methods and the resulting data creating the computer analysis model, it will be analysed during its operational life as the physical bridge’s digital twin.

Randall, added: “this project really is a great demonstration of bringing together different areas of digital working to supercharge the design process, use and data analytics”

In light of this unchartered territory (in the world of construction at least) MX3D and their dedicated team of experts have taken the design and fabrication of the bridge to the next level in project they call ‘a Smarter Bridge’.

The expert consortium of mathematicians, Internet of Things (IoT) specialists and others developing a smart sensor network to monitor the bridge’s activity and performance in real time. The Alan Turing Institute are looking at data-centric engineering approach and comparing the real-time structural behaviour and proving it against the computer model.

The IoT approach to recording the behaviour of the bridge in several different scenarios – we’re heading for an incredibly rich dataset bringing valuable insight to the world of bridge design that will ultimately lead to a dataset useful for similar future structures.