The Year in Infrastructure 2018 Awards celebrated extraordinary work in the design, construction and operations of infrastructure around the world. BIM Today highlights two UK projects that took home the top prizes

The Year in Infrastructure Awards were launched in 2004 as the Be Inspired Awards to showcase how users of Bentley Systems software were advancing the design, construction and operation of infrastructure across the globe. Since then, the programme has recognised more than 3,500 projects. The 2018 edition attracted a record number of entries, with 420 schemes representing more than 350 cities in 60-plus countries put forward.

The London sewerage system was designed in the Victorian age to serve a population of around four million. There are now more than double that number of people living in the capital and this growth has put significant strain on the system, causing it to spill millions of tonnes of sewerage into the tidal section of the River Thames every year. 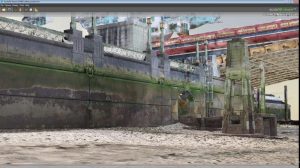 The £4.2bn Thames Tideway Project aims to tackle this by creating a 25km tunnel, running mostly under the tidal section of the river through central London, to provide capture, storage and conveyance of almost all the combined raw sewerage and rainwater discharges that currently overflow into the Thames.

The project has been divided into three contracts: East, Central and West.

The scale of the scheme creates many challenges, from marine construction works in the River Thames to solving design issues where large gas mains are located close to existing river walls. It is critical that such services are protected during construction work.

AECOM, as part of Flo, a joint venture with Ferrovial Agroman and Laing O’Rourke, is the main designer on the Central Contract to the Main Works Contractor.

The company undertook the Central Contract on behalf of Flo using Bentley’s CDE based on ProjectWise to manage engineering data.

Using workflows, defined document coding and managed workspaces, AECOM delivered a controlled and secured CDE to manage what is a highly complex project.

The CDE, based on ProjectWise, provides a central repository for all project data produced by each of the stakeholders. This ensures they are working to a common standard, including both temporary and permanent works.

AECOM has already seen numerous benefits and savings from adopting a digital twin and CDE. The Design Master Model was used to produce iModels on a weekly and monthly basis, which were available for all stakeholders to see the development of each site as it progressed.

The project team used iModels to carry out multi-discipline clash checks that were sent to the design and modelling teams to resolve, as well as using them to review internal design.

The digital twin and CDE also resulted in “non-engineering” savings, including increased IT security and reliability, better access and editing control, improved automatic PDF generation and reduced travel costs for project members by enabling real-time access anywhere, at any time.

Barry Jones, associated director and BIM manager at AECOM, said: “Bentley’s ProjectWise provided a controlled environment where a virtual representation of the asset’s eight individual sites is built. The environment comprised multiple disciplines that produced more than 140,000 documents from more than 40 stakeholders.

“There were more than 1,000 users working in a coordinated fashion from the design phase through to construction and handover to the owner-operator.”

The Skanska Costain STRABAG (SCS) joint venture won the Advancements in Rail & Transit Award for its work on the HS2 high-speed rail project. 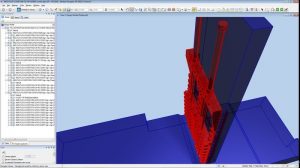 The £56bn scheme, which will connect London with Manchester and Leeds via Birmingham, is one of the most challenging and complex ever undertaken in the UK and is the most expensive construction project in Europe.

The SCS JV is working on Phase One of the scheme linking London and Birmingham, which includes around 200km of new high-speed rail and four new stations across seven main works civil contracts. It also includes three separate enabling works contractors and six route-wide systems contracts, in addition to new rolling stock.

To meet its timescales, SCS used Bentley’s OpenRail solution, comprising applications and services for the planning, engineering, project delivery and operations of rail and transit infrastructure.

OpenRail’s foundation, Bentley’s Connected Data Environment (CDE), provides the team with trusted information whenever and wherever it is needed. In combination with other integrated applications, including OpenRail Designer, OpenRoads and OpenBuildings Designer, it is automating previously manual processes in the engineering and design of portals, tunnels, ventilation shafts, retaining structures and earthworks.

This is helping SCS realise a number of digital advances, including: 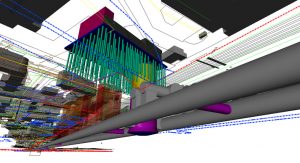 Deliverables management: Enabling the coordination of files and data within the team and with other stakeholders, including Network Rail, London Underground and Crossrail.

Clash resolution: Crucial to the successful detection and resolution of major interface areas early enough to avoid them becoming an issue on-site and saving an estimated £1m to date.

Design review: Leveraging Bentley’s iModel technology to reduce the time needed for design review by 20%, resulting in estimated savings of £500,000.

Estimating: Direct use of engineering models for the estimating process has more than halved the time needed and used 75% less resources than planned versus traditional methods, leading to a saving of more than £300,000.

With OpenBuildings Designer being used as the principal modelling application due to its data group and information management properties, the team is thinking about the future operation and maintenance of the railway.

By linking asset information directly to the design model, SCS is enabling discussions with operators and maintainers to happen much earlier on with a project of HS2’s size and complexity, allowing different stakeholders to comment on the design and change elements that they feel will make a tangible contribution to the safe and efficient running of the network.

“Using Bentley solutions has allowed us at SCS to realise our mission statement of creating a project that will be seen as the Digital Blueprint of Future Infrastructure Projects,” said Peter Ruff, head of BIM for SCS.

“They have allowed us to create, manage and leverage intelligent BIM models and the data housed within them on a complex project, and see a significant increase in productivity, efficiencies and collaboration between a large team and a multi-staged contract.”