Jack Bird from Postage Supermarket discusses how an upcoming technological advancement, drone deliveries, may mix things up for the construction industry. He thinks that the focus is on ‘evolution’ not ‘revolution’ – which has always been the case for the industry, right?

Long gone is the time when drone technology was seen as something from an action movie, or a development to be afraid of. Drones aren’t simply for the super-elite anymore, and they’re becoming items that hold an everyday function.

From their popularity with the general public to the developments for use in business, this high-flying tech is becoming something that is changing the world for better, not for worse.

Across a number of industries, drone technology is being seen as a way to drag decision-making and procedures into the 21st century.

Whilst drones, or UAVs (unmanned aerial vehicles) have been around since way before World War 2, their use rose in popularity in the early 00s, when the technology became cheaper and more readily available to businesses and the general public alike.

In the same way that computers moved from Government machinery and toys for the super-rich to household items, drones can now be picked up on the high street and easily online. And that’s lead to the development of use in industry.

What do drones mean for the construction business?

To put it quite simply, drones have revolutionised what has become standard on a construction site in just a few years they’ve been usable.

To analyze the effect drone technology has had upon the construction industry, you only need look at the functionality of the machine itself. Quick, with the ability to reach tall heights, manned with a camera and easy to use remotely. Each one of these traits gives you a small insight into why more dangerous industries and safety-conscious companies have started utilising this equipment.

Let’s look at the relative dangers of manning a building site. There’s usually plenty of heavy objects and large expanses of space that are tough to manage for a single person or group of individuals. Safety and security are two of the biggest worries of managing small and large-scale sites. But with the use of a drone, this needn’t be as much of an issue.

Sites can be watched and deemed safe and secure from the security of a stable position on the ground. Even the movement of objects – a daily occurrence in construction – can be rendered much safer using drones with minimum risk to any team members.

Safety and security are of paramount importance, but so is analysis. The ability to survey a particular area is basic stuff, but traditionally takes hours of time and labour-intensive effort whilst still allowing for human error along the way. Being able to use a ‘drone-eye view’ of a particular plot of land drastically cuts out the need for human resource and reduces the chances of mistakes.

What changes will drone technology bring to the industry?

We’re always looking for the benefits of newer technology, but it is good practice to identify what change those benefits will bring round. And how that affects the overall landscape of the industry.

From a safety perspective, the change that will be brought about is clear. The way work begins and continues will be altered forever.

Take some of the most common safety concerns on site – incorrect use of safety equipment, moving objects and manual handling.

Each one of these dangers can be mitigated and reduced by the use of drones to provide ongoing inspection during working hours. Whilst previously a site manager may be too busy to safety check often throughout the day, this can be done on a screen, remotely, from one place. The reduction in accident and injury – and in turn, reduced resources – could change the game for both business and employee.

Similarly, an increase in accurate communication will change the efficiency of projects, allowing for quicker time-critical decisions to be made. This change will hopefully see the reduction in delayed projects and allow senior members of teams to identify problem areas and gain critical sign-off or a change in a strategic direction much quicker.

This type of development will again allow the correct use of resources, saving time and money for businesses and managers who move quickly from one project, or one construction site to the next.

As explained above, UAVs have developed quickly throughout the last 20 years, and the expense and upgrade potential means that we’re probably just touching the surface of what is possible with drones in construction.

Take, for example, the use of computers in this sector. Where once bidding, budgeting, and designing would have been done by hand, these tasks can be done quicker and cheaper through a computer.

Soon, we will see similar developments in the use of drones. It is not beyond the realms of possibility that UAVs will be able to automatically calculate the size of premises or structure to aid with the design process in a form that could eventually lead to a reduction in planning time.

This won’t, however, lead to the exile of manual workers and skilled labour. Data will always need to be turned into information, and that is a task that only humans can do.

What this technology will do is allow companies to better place these skills and streamline their processes to improve their core offering as a business, and their ability to satisfy demand. It’s not about replacing human resourcing but allowing businesses to utilise skills in a greater way. Something drones will help with hugely. 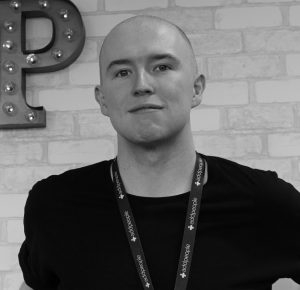