Script&Go has unveiled a major overhaul of its Site Diary app with the inclusion of an integrated task/allocations feature which allow user to create tasks and report progress on a task with the diary. 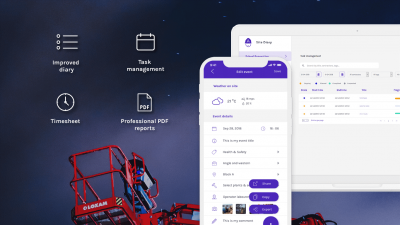 A common complaint we heard in the industry is that information about a task is often repeated in the site diary, which leads to duplication of work and a loss of time.

The update is first of its kind to integrate diary and task management, allowing users to create and add information about a task (such as manpower, equipment/plant and materials) and assign it to people involved in the project. When reporting progress on a task, the diary form will be automatically filled with all the task info which will make for quick report and no additional work to fill the entire form.

With legacy Site Diary, users reported time savings of between 45 minutes to 2 hours per day per user. The 2019 update will even save more time per day for site managers, construction managers, site engineers, project managers and foremen. The key advantage of Site Diary is its simplicity, offline availability, real-time synchronisation, linking photos to diary entry and automatic weather reports. 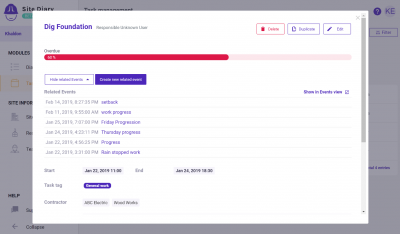 Site Diary is a powerful app that enables those in the construction industry to keep a record of everything that happens on site while maintaining visibility on the progress of work projects. Khaldon Evans, Site Diary’s Chief Marketing Officer, says: ‘People in the construction industry don’t want to spend time filling out diaries day after day because it is a time-consuming activity that could be better spent elsewhere. This major overhaul of our Site Diary software is a real game-changer as it enables site workers to fill their diaries on the go, saving valuable time and effort. Spend less time filing paper and more time building.’

Site Diary ensures that a company’s diary records can never be lost, damaged or be tampered with – an essential feature in case of disputes. In addition, firms can share info and collaborate with site workers and office teams, and employees can create, assign and monitor tasks in any location on any device, giving them total flexibility.

Site Diary was first developed by Swedish company Appear Network in 2014 as a part of the European-Union-funded MobiCloud Project. This first Site Diary was developed in conjunction with Costain and COMIT.

In 2016, French construction software developer Script&Go acquired Site Diary as a part of its strategy for international expansion as well as addressing the needs of field workers.

Since the acquisition by Script&Go, Site Diary is being used by more than 6,000 construction workers in 94 countries and more than 240,000 diary records were created between 2016 and 2018.

Site Diary is a construction diary and task-management app that keep records of everything that happens on site while having visibility on work progress.