The world’s tallest modular hotel is on track to be constructed in New York City in the autumn, which will see the creation of a 360-foot tower erected over 90 days

The modular hotel will carry the Marriott International brand, with prefabricated and pre-furnished guestrooms.

To be topped with a modular roof and modular rooftop bar, the modular hotel is expected to open in late 2020 as the AC Hotel New York NoMad.

“The world’s tallest modular hotel in one of the world’s greatest destinations will act as a game-changing symbol to ignite even greater interest in modular among the real estate and lending industries.”

The 168-room, 26-storey AC Hotel New York NoMad is scheduled to rise at 842 Sixth Avenue with prefabricated guestrooms arriving at the hotel site fully constructed. Each module will contain a fully outfitted guest room – with beds, sheets, pillows, flooring and even toiletries.

“This hotel takes every advantage of offsite manufacturing, as you might expect. But it does so in a way that defies expectation. We wanted to demonstrate that modular building can do more than just harness the efficiencies of the factory. It can produce a graceful and iconic tower. And yes, it can do so at the rate of an entire floor a day.”

Marriott, which has the largest pipeline of hotels in North America, began researching modular construction in 2014 to offset lengthening hotel construction times. Since 2011, Marriott has seen the average time to build and open a hotel in North America increase by as much 50%, depending on factors such as location and size of property.

Since 2015, Marriott has been educating owners, franchisees, architects, lenders, consultants, general contractors and other stakeholders across the industry about the benefits of modular by hosting town halls, factory tours and stacking events. 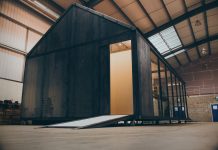 How modular housing can launch a self-build boom 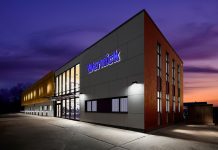 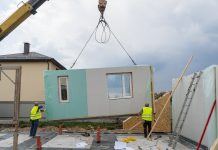 Housing shortage: Could modular construction be the answer? 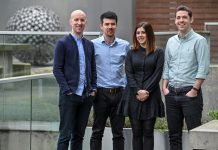 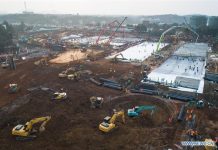 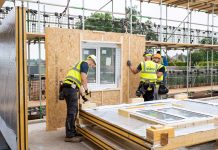