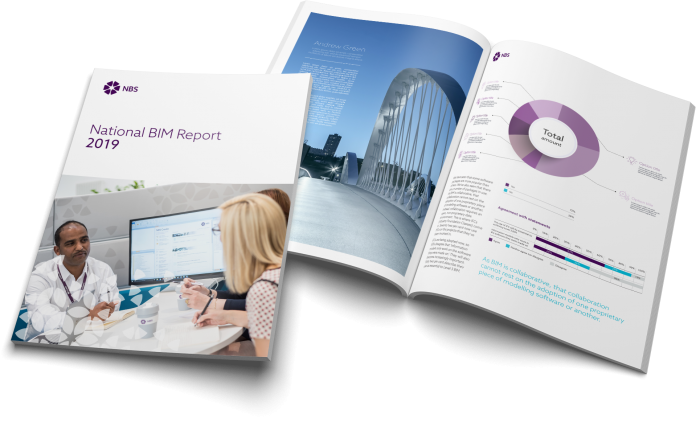 The latest 2019 BIM survey, which received more than 1,000 responses, shows a 1% decline in adoption. Despite this, NBS says it remains confident that BIM will continue to embed itself in workflows as construction continues to move in a positive direction, embracing collaborative and digital ways of working.

Dr Stephen Hamil, innovation director for NBS, said: “In the early days of BIM, some may have equated it to simply generating drawings from a model.

“There is now a wider understanding that BIM is about project teams following a common process based on standardised information and collaboration. We think we’re seeing a period of consolidation – where more people understand what BIM really represents and are embedding that into their workflows.”

The 2019 BIM survey shows that there has been a trend of increasing BIM awareness and adoption across the UK construction industry, using standards and protocols as the platform for this. This national success is expected to be bolstered with the new ISO 19650 series, creating a standardised digital process across the world based, in part, on the BS 1192 standards.

The 2019 BIM survey lists some of the main barriers to the adoption of BIM, such as lack of client demand, the need for training, the time required to get up to speed and a lack of standardised tools. NBS says it has sought to align the NBS content and software to the ISO method of working to allow its customers to more easily produce BIM deliverables within their project teams for clients.

NBS chief executive, Richard Waterhouse, added: “We have seen some negative trends within the report that might suggest the emergence of a ‘two-speed industry’ – the ‘BIM engaged’ and the ‘BIM laggards’.

“For the advocates, 60% of those who have used BIM have seen improvements in efficiencies whilst 22% of those yet to use BIM have indicated they would rather not adopt it.

“In addition, the demand from clients, on both private and government projects, is mixed. The survey suggests that not all clients across the industry are seeing the benefits of BIM. We would expect this to increase as BIM, defined by ISO 19650, becomes more commonplace.

“Once teams have had a good experience of working collaboratively using digital processes then they will demonstrate the benefit to the client. The client will then, in turn, request that this process is followed on subsequent projects.”

The 2019 NBS survey also indicates that there has been a drop-in awareness of UK Government activities in this area despite the fact that the government’s initiatives led to the ISO standards that were launched at the end of 2018.

This drop could be explained by recent changes such as the replacement of the BIM Task Group by the Centre for Digital Built Britain (CDBB). It may take time to rebuild this position in the market. There are however a number of key projects underway, involving Government, construction industry and academia which may drive greater awareness that will be seen in the 2020 survey.

Waterhouse continued: “Overall, there can be no doubt that digital processes and technologies are changing the industry.

“Use of the cloud is enabling collaboration, giving the industry the opportunity to break down the silos and form a new approach to information development and distribution.

“In addition, the latest International Standards are giving us a once-in-a-generation opportunity to standardise processes across the global industry. This is an exciting time, and we must now take advantage of it to help create a step-change in productivity, transparency and quality within our industry.

“At NBS, we have already played a significant role in the UK’s BIM journey and we will continue to do so as we move towards a global digital construction industry.

“We have supported the BSI committees that have developed BIM standards, as well as supporting the BIM Task Group’s original core initiatives, where we developed, published and now maintain the Uniclass 2015 classification system, defined in the UK as the system for classifying information on BIM projects in BS EN ISO 19650-2.

“This year, our journey to support the global BIM world takes a giant leap forward as we launch a global platform for BIM-related content.

“Our ground-breaking cloud specification tool, NBS Chorus, has connected specification clauses, technical guidance and manufacturer specifications for North America, the UK and Australia, dynamically linked to geometry objects and standards, technical and regulatory data. We have, and will continue to develop digital content and to enhance our software offerings to support global BIM processes.”