Home BIM News Back to the future: Assessing the BIM 2050 report

In 2012, a group of 18 young construction professionals pondered the question, what will the construction industry look like in 2050? One of the authors, Stefan Mordue, takes a look at how far the sector has progressed towards their predictions

Incredibly, seven years have passed since the publication of the BIM 2050 report and the group members, including myself, have seen our own lives change immensely. But has the industry changed?

In 2011, the UK government challenged the construction industry to modernise and innovate. A Building Information Modelling (BIM) Task Group was formed to drive adoption of BIM across central government. It is against this backdrop that the BIM 2050 group was established.

It took 20 months to put forward a futuristic vision of what an open approach to collaboration and technology would look like. Our report covered two related areas: what will the future of our industry look like and how do we prepare our talent to be ready and eager to pursue a hi-tech construction career?

From the outset, we recognised that in order for our industry to meet the requirements of the future, we needed to be digitally enabled and address a growing skills gap. The conundrum we faced was how to prepare students for roles that haven’t been created, using technology that hasn’t been invented, to solve problems that don’t yet exist. 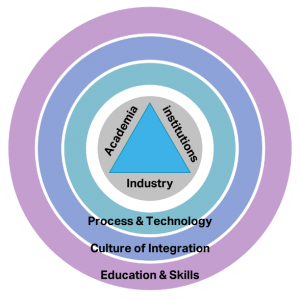 We set about creating a number of workstreams. Our starting point was education, enabled by changes to technology and process but underpinned by commonality in beliefs and a culture for integration. It was important to have a holistic approach as each workstream had an effect on the other.

The stage or ‘wave’ is a world where predictive decisions are driven through emergent information (2030-2040) to one finally that is adaptive and agile based on artificial intelligence (2040+). 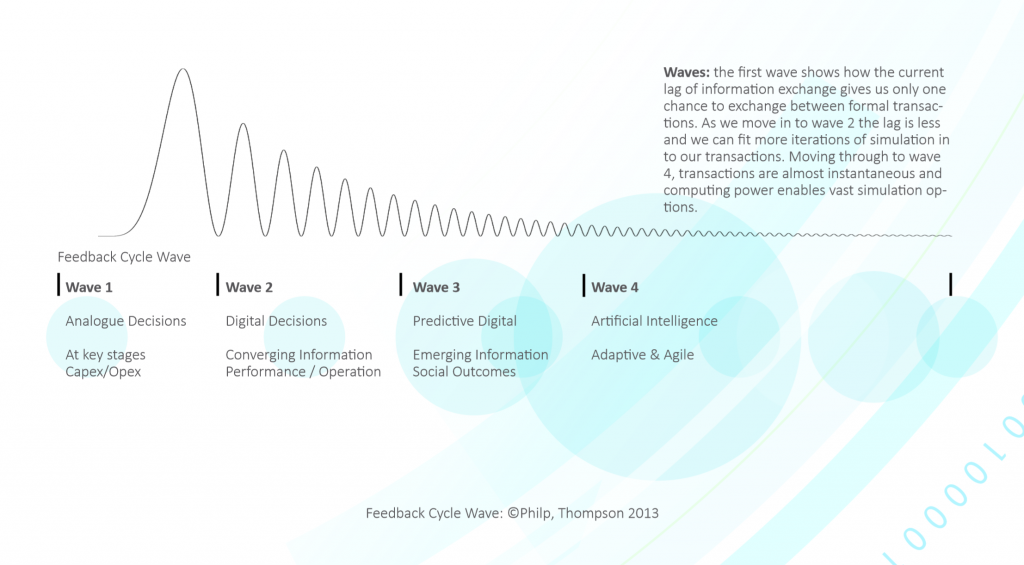 By 2040-plus, we predicted a fully connected construction industry, whose primary decision-making needs are met using algorithms, Big Data and technology platforms are vastly different to an industry that is still performing analogue tasks.

As we near the end of our first wave, and fast approach 2020, many of the group’s predictions are being realised as we see a convergence of policies around a series of aligned and digital themes. The UK government’s 2016 BIM mandate has been a catalyst for change and clients are beginning to demand integrated operational data at handover. However, as predicted, we continue to rely on highly engineered processes to control poorly integrated data sets and varied sources of information to make this happen. 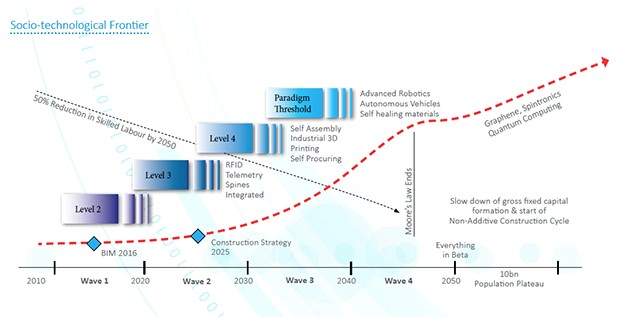 Productivity still remains an issue, as highlighted by the report and further reinforced by the 2016 CIOB report Productivity in Construction: Creating a Framework for the Industry to Thrive.

Government figures released in April 2016 reported the biggest fall in UK productivity since the 2008 financial crash. More alarming was that the figures showed that construction productivity had only slightly improved since 1997.

To address this gap, the government is pushing the industry to improve the delivery and unlock productivity improvement and performance through Smarter Infrastructure.

The report recommends solutions such as offsite manufacture, the use of digital technology to make new and existing infrastructure smarter, and the sharing of innovation and best practice. This all points to the use of a standardised platform with digitally designed components to deliver the UK’s infrastructure pipeline.

In addition, in early 2019, the government sought advice to understand further how a platform approach can be implemented across government departments.

Additionally, the Centre for Digital Built Britain (CDBB) continues to push the digital agenda forward, recently publishing its Gemini Principles, a framework for the development of a National Digital Twin following the recommendation of the National Infrastructure Commission (NIC) Data for the Public Good report.

The use of digital technologies within construction is also increasing, perhaps in part by the CDBB programme, which is leading the way in academic research in sensor technologies and Artificial Intelligence (AI).

While the use of Robotics and AI within construction remains low compared to other industries, it is starting to emerge in areas such as optimising project schedules by considering millions of alternatives for project delivery.

The use of image recognition and classification is also being used to identify unsafe worker behaviour based upon video data and collect and analyse sensor data to plan proactive preventive maintenance by understanding patterns that emerge.

The BIM 2050 report highlighted that the starting point for any change should be within education and skills. Since the report’s publication, we have seen new entrants and existing construction workers and professionals beginning to look beyond traditional educational courses.

For example, in 2016, the University of Westminster launched a successful Digital Construction MOOC (Massive Open Online Course) in collaboration with The B1M. With no fixed timetables and a flexible approach, some 1,000 students took part worldwide.

Courses such as these are helping with sought-after skills within asset management, such as the ability to understand Big Data and make predictions across global asset portfolios. New skill sets are focused on predictive data analysis rather than reviewing the data itself and a new generation of construction professionals are emerging that are able to mine data from multiple sources.

The BIM 2050 report expressed a health warning in that not all projections into the future will be positive. The increase in digital data also increases the risk and threat to security. We must evaluate how we manage risks that can arise from unauthorised access, manipulation and sharing of data, information and systems.

Recent NHS data security breaches and data scandals such as Facebook-Cambridge Analytica and accusations of election manipulation highlight the case.

It will be interesting to look back in another 10 years as we enter a wave of predictive digital decisions and AI to see what effect social, technology and political influences have had.

While predicting the future is difficult, we do know two things for certain.

Change is inevitable and time waits for no one. Perhaps the best way to predict our future is to create it. 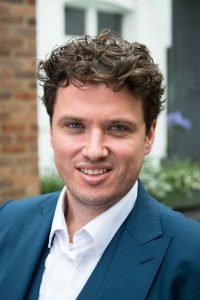