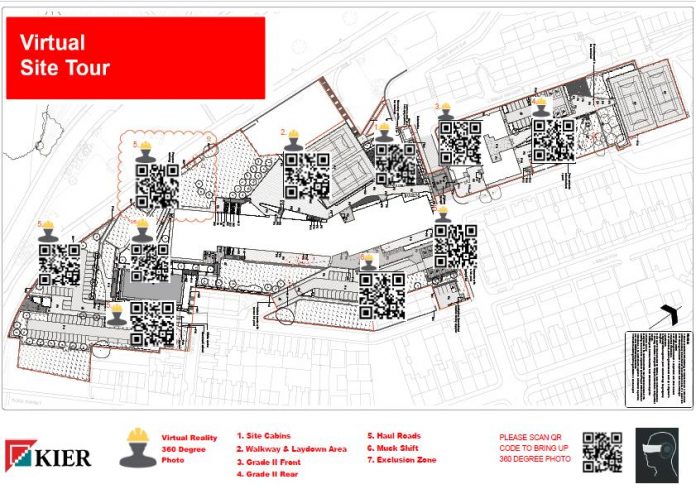 In a world of TIDP’s, LoDM’s, CoBie information, BEP’s and a range of standards to go with them, how do we get engagement from those on site at our construction projects who might be less familiar with BIM? And how can we work closer them? Simple, by demonstrating how technologies in combination with BIM can make their jobs easier and more efficient.

The construction industry, like many, is performance driven, with the need to be able to quantify a project success based on a number of areas including; quality, cost and time (with the overarching umbrella of Health and Safety). It’s by showing the added value of embracing new technologies, starting with the use of virtual reality, that we can have further conversations with interdisciplinary projects teams about integrating solutions which may not show immediate visibility.

New build secondary and the refurbishment of a Primary school for approximately 1,400 students. Education provision is from nursery right through to sixth form.

As the principal designer for the above scheme, it was imperative that residual risks were captured efficiently.

The recent release of PAS 1192-6 goes some way to bridging the gap between 2D format information into the 3D environment. In addition, the use of 360° panoramic images and QR codes have enabled us to develop an immersive experience allowing for a Virtual Site Tour as we learn from different industries such as Gaming and Manufacturing to refine our construction management techniques and processes.

One of the challenges on the project was a level change of approximately 25m which meant large earthwork and civil activities were needed before beginning to start building the academy. With the vast quantity of retaining walls, we needed to ensure risks were being communicated and understood in the right way.

The added value of implementing the tour can be seen through the reduced time it takes to carry out an onsite induction, as the supply chain can be sent the tour prior to visiting the site so they are more informed about the layout. As the cost of producing the virtual site tour is minimal there is no reason why this approach could not be adopted more in the construction industry. The images also act as a record which can be relied upon in the future.

“A great innovation and a breath of fresh air to inductions. Its interactive nature engages our team further and stimulates conversation.” – Steven Fry, Senior Site Manager.

Refurbishment project on the 19th floor of a live hospital to provide 4 No operating theatres, including associated support and recovery areas.

Whilst record keeping is an important aspect of how we monitor quality through the construction phase of the project lifecycle, this does not mean that thousands of photos have to be taken and kept in a folder.

By using 360° scans of the project, we are able to provide the end user with a virtual tour and record of their brand new facility, whilst simultaneously serving as a record of the condition in which we handed the project over. This powerful aid helps to improve soft landings of our project in general, with the potential of regular surveys during the construction phase to assist the project team inductions and pre-inductions prior to the supply chain arriving on site.

Those not able to attend the site on a regular basis have the potential to have a greater input into the project. The ability to view the model, which is hosted online, in remote meetings away from site allows teams to better visualise the scheme and enhance collaboration. Surveys can be carried out at regular intervals with little or no disruptions to operations.