The Pyramus and Thisbe Club’s Michael Kemp shares how the third edition of the guidebook, The Party Wall Act Explained, will provide clarity for the sector

It is fair to say that initially the legislation was often overlooked outside the South East, particularly away from the big metropolitan areas, but there is a feeling now that the Act is better known and understood at least amongst the professions and within the property development industry.  It is still perhaps less known to the general public outside of the South East.

Coinciding with this 20th Anniversary the eccentrically known Pyramus and Thisbe Club (named after the lovers in Shakespeare’s A Midsummer Night’s Dream who communicate via a hole in their shared wall) have published a new edition of their guidebook “The Party Wall Act Explained”.

This is the third edition that has been published since the implementation of the 1996 Party Wall Etc. Act, and it has been significantly amended to take into account changing practice and developing case law. 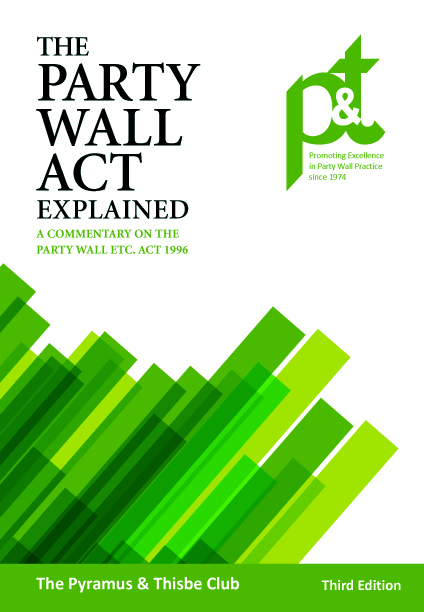 So why is guidance needed?

Property professionals — particularly in areas where the Act has less history — can find implementing its requirements somewhat daunting.  Many householders and indeed some builders and developers are wholly unfamiliar with its requirements. These require that neighbours be notified in advance in writing and consent in writing to proposed works on or under a party wall.  If no consent is forthcoming, then surveyors need to be appointed who will then prepare a Party Wall Award which will set out the nature of the works which are permitted and set out the way in which they should be implemented.  Certain adjacent excavations and works to party fence walls are also notifiable.

Many householders and developers believe that if a neighbour fails to respond to such a Notice, they can simply get on with the works.  This is erroneous and is not the case.  Proceeding with works that are notifiable under the Act without proper documentation being in place can lead to injunctions being obtained to stop the work or difficulties being experienced in eventually selling the property.

“The Party Wall Act Explained” sets out clear guidance on the Act clause by clause.  The commentary given in this new edition has changed significantly from the last edition, particularly over issues such as access to the neighbour’s land to carry out certain notifiable work, and also on areas such as security for expenses and special foundations. Both of these are issues which have come much more to the fore in recent years particularly where large-scale domestic work such as basement extensions are being implemented.  Whilst many may think that such works are limited to high-end properties in London and are not an issue nationally, it should be borne in mind that the landmark case on security for expenses for deep excavation works actually related to a residential property in Dorset, and there are many examples of this kind of work taking place throughout England and Wales.

How does the Party Wall Etc. Act 1996 impact on planning and building control officers?

The Party Wall Etc. Act 1996 is another statutory process that householders and developers have to comply with on top of obtaining necessary planning and building control approvals. Although with one small exception discussed below, it is not a process that involves those officers. Many householders wrongly believe that once the local authority has approved something, nothing stands in the way of them proceeding with the work.  If the Act applies, then this is not true.

There is hearsay evidence that once the Local Authority Consents have been issued, applicants have asked whether there is anything further they need to do before commencing work and being advised that there is nothing.

Many local authorities notify applicants that the Party Wall Etc. Act might apply when Consents are issued for planning or building control.  It is not known if this practice is universal, but there is a view that it should be.

Do planning and building control officers have any duties under the Act?

The Party Wall Act Explained – Third Edition is available from the Pyramus and Thisbe Club at a cost of £26.75 to members and £36.75 to non-members.

The Pyramus and Thisbe Club