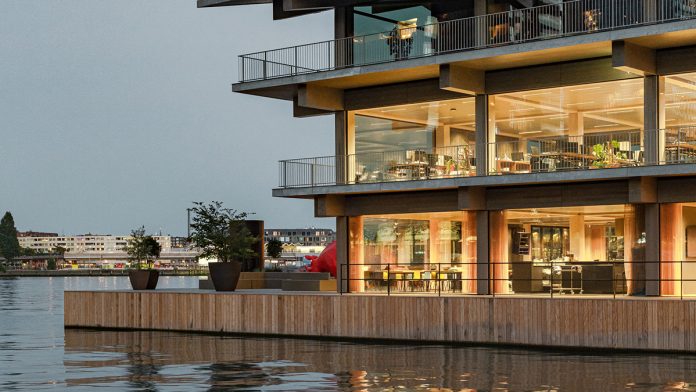 Previously the stuff of science fiction, could floating cities offer a very real solution to the threat of rising sea levels? Nemetschek Group considers the possibility

Around 40% of the world’s population lives in regions that are only a few metres above sea level. Of the 33 so-called megacities – among them, New York, Bangladesh and Amsterdam – 21 are located on the coastline. This means that rising sea levels due to global warming and melting polar ice caps are becoming an increasing threat for a quickly growing number of people working and residing in these areas. This development is imposing a completely new challenge upon city planners and designers. One possible solution, floating cities, sounds like a rather utopian idea – or does it?

Initial experiments with apartments on the water are already underway. The Dutch, in particular – with their large metropolitan areas below sea level – know how to live with waterworks. They are pioneers in the field of floating cities, having already conducted experiments with swimming structures. Not surprisingly, the Netherlands is currently considered the forerunner of this idea, developing the first floating urban structures that flexibly and sustainably complement the static network of the original city.

The Nemetschek Group has taken a closer look at these experiments in its Topics & Insights blog, which regularly highlights trending topics from the AEC/O industry and what developments are shaping the future of construction.

From floating office facilities to the first floating communities 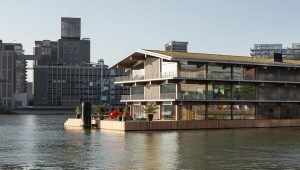 One example of how a floating building might be planned, constructed and operated is the Floating Office Rotterdam (FOR). It is a self-sufficient, completely demountable, off-grid and CO2-neutral office building designed by Powerhouse Company, a Rotterdam-based architectural firm. If the sea level rises due to climate change, the FOR will neither sink nor be flooded.

What initially sounded like a dream of the future became reality in the Rotterdam Rjinhaven port in the Netherlands. Powerhouse Company approached the task of designing a sustainable floating office building holistically. However, the design and construction of the FOR proved challenging. It was important to the constructors that the building met modern sustainability requirements. Thus, wood was predominantly used for the construction, as it is recyclable, easy to dismantle, and reduces the building’s carbon footprint.

The Floating Office is based on a skeleton construction of massive glulam beams bracing the cross-laminated timber ceilings and walls. The 22m-long ceiling beams in the building’s transverse direction are manufactured in one piece to shorten the construction time for the timber structure. Heating and cooling ceiling panels are suspended in the ceiling grid, behind which the technical cabling lines are concealed.

The entire office building was designed in Archicad by the Nemetschek Group’s brand Graphisoft, which helped to support the holistic design approach regarding sustainability and digital design methods. Also, the requirement to create a self-sufficient building made the designers from Powerhouse Company chose Graphisoft Archicad. Due to the open interfaces, the individual disciplines could work simultaneously and access the same model. This not only avoided errors with the complex timber construction but also with the heating and cooling ceiling panels.

In addition, the possibility of a later deconstruction or a “move” to a new location could be planned and modelled directly. As a result, there are no nasty surprises at a later point in the building’s lifecycle, and the Powerhouse Company team knows exactly which material was used where. The demand for sustainability was therefore not only applied to the building, but also during the planning phase.

With its own solar energy source and water-based heat exchange system, it is completely self-sufficient. The FOR also has public facilities. Featuring a restaurant with a large outdoor terrace and a swimming pool – accessible via a walkway – the building forms a key element in a redesigned harbour by ensuring public space on the waterfront.

Meanwhile, the overhanging balconies and a pitched roof serve as solar shading. In addition, the roof serves as an energy source: the north side has a green roof, while a 900m2 photovoltaic system was installed on the south side, making the building an energy-positive building. This means the building is self-sufficient from an energy and heating perspective. The windows also allow plenty of daylight into the interior, creating a pleasant working atmosphere. And nature is also incorporated into the project – the green roof improves the climate and provides new habitat for insects. It’s ready for the circular economy.

Another project that is currently experimenting with floating cities is based in the Maldives. For the government of the Maldives, where more than 80% of the total land area is just above sea level, a structure with floating segments modelled after coral reefs is currently being developed. A ring of barrier islands acts as a breakwater underwater, stabilising the floating platforms while protecting the reefs from encroachment. A network of bridges and canals connects the various segments of housing, stores, services and even a school and hospital, self-sufficiently powered by renewable energy.

Another exciting approach to floating cities is floating modules, every two hectares in size, on which up to 300 people can live. Anchoring to the seabed stabilises and connects the elements together. During strong storms and swells, the modules can be detached and transported to calmer waters.

The floating community is designed to adapt to the changing needs of its population.

The first design is currently being planned in South Korea. It will incorporate the social, economic, political and cultural characteristics of South Korea, as well as innovative technologies and materials. The prototype is expected to be completed by 2025 and will then serve as a blueprint for new climate adaptation strategies aimed at being sustainable and adaptive.

Why build on water?

Countering rising sea levels with new ideas and the combination of nature and technology is a sustainable and, at the same time, forward-thinking way to shape the world.

Most sustainability measures in buildings aim to prevent climate change. Designing a floating building or city helps protect it from the effects of climate change and raises awareness about the issue. It also shows that it is well worth pursuing even unconventional concepts – and demonstrates that unusual situations also produce extraordinary solutions.

Compared with construction on land, building on water is still very costly and challenging. But the will and vision of the planners and construction firms in Rotterdam, the Maldives and South Korea to build truly sustainable buildings were more powerful than the challenges that needed to be overcome.

*Please note: this is a commercial profile