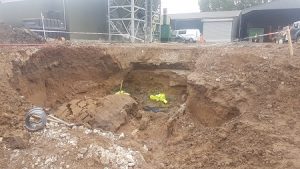 Bridlington Magistrates’ Court heard that on 26 June 2019, the company was undertaking groundworks at West Farm Stone, Creek Sunk Island, East Riding. The worker had entered an excavation in order to measure the depth when part of it collapsed on him.

An investigation by the Health and Safety Executive (HSE) found that the excavation had three sheer unsupported sides and was not battered back.

The worker was trapped by the collapse and sustained a broken tibia and fibula on his left leg. Other workers were also put at risk as they went into the excavation to free the trapped man.

The importance of a thorough risk assessment

“This incident could have led to the death of the worker. The case highlights the importance of identifying and following any risk assessment that was set in place.”