According to AXA Business Insurance recruiting women into building trades is just as economically important as encouraging women onto FTSE 100 boards.

The construction industry is in the midst of a skills shortage that promises to have serious long term ramifications if it is not sufficiently challenged. With Brexit looming on the horizon in the next two years it is becoming apparent further shortages are on the cards. In particular changes to immigration could put EU workers off the UK and make it difficult for construction firms to hire within the EU.

One of the major issues with recruitment in the sector is undoubtedly the lack of female presence, which could be used to plug many of these skills gaps facing construction. There has definitely been a push in the past few months regarding encouraging more women into the sector, but to do this there needs to be a greater push in schools, with more focus on the job roles available in construction.

The sector is undoubtedly heavily male dominated and the report said it could benefit from more female workers in trade roles.

AXA warned that the stereotypical view of building and construction was putting women off a career in the sector. Furthermore, the lack of promotion for women was leaving the field dominated by men.

Managing director of AXA Darrell Sansom said this issued needed to be addressed. “The government pledged a million new homes and £500bn investment in infrastructure projects by 2020 – that’s a huge part of our economic life for women to miss out on.”

Data from AXA revealed that just 5.2 per cent of people employed in the sector are female. Among the roles least represented by women are stonemasons, heating engineers, plasterers, electricians, and plumbers.

Sansom said it was vital the construction industry worked to encourage more women into the sector and that this was “every bit as important as getting more women onto FTSE 100 boards.” 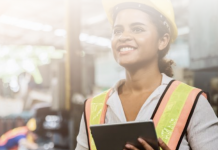