A training centre, that has transformed the lives of hundreds of people across Greater Manchester, has celebrated its 10th anniversary by welcoming its 400th apprentice

The Skills Centre in Salford was set up by housing provider ForHousing in 2009 to create new possibilities for people who otherwise might find it hard to find jobs or get qualifications.

To date the centre has worked with more than 900 people from all walks of life to help fuel their potential, allowing them to find employment, learn new skills and gain qualifications.

The training centre has also been home to a number of projects aimed at improving the lives of local people, including the Schools Links programme, which provides training for 14-16-year-olds who experience problems with their school’s mainstream curriculum or have been excluded from school.

More than 213 pupils have accessed the programme, making ForHousing the biggest provider of Key Stage 4 alternative training in Salford.

Ryan Brodie, 26, of Walkden, was one of the first people to train as an apprentice in the Skills Centre when it opened. He said that access to training at a young age is an important part of helping people to believe in themselves and make better life choices.

“I tell people all the time – I was lucky to get my apprenticeship, it sent me in a different direction,” said Ryan who qualified as a joiner in 2013 and now works for national property services business Liberty.

“I don’t know what I’d be doing now if I hadn’t had the opportunity to take up an apprenticeship. There are not enough opportunities for young people out there, so places like the Skills Centre make a massive difference.

“I would tell anyone who has the chance to do an apprenticeship as it can change their life for the better.”

Henry Terefenko, ForHousing CEO, said: “We’re really proud of how the Skills Centre has helped more than 900 people to gain training, qualifications and employment opportunities over the past decade.

“It’s great to hear the stories of people like Ryan who have fuelled their potential and built a brighter future thanks to the skills they have learned and support they have received.

“We’re all about creating more possibilities for more people and increasing aspirations. Over the next ten years, we look forward to seeing the Skills Centre empower hundreds of more people to fulfil their potential.” 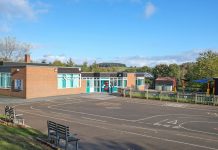