If approved, the Eden Project charity aims to begin work on the project by next year.

It reveals plans to combine indoor and outdoor attractions, connecting people with the natural environment of Morecambe Bay.

It estimates the seaside regeneration will attract 760,000 visitors a year to the resort town.

Si Bellamy, head of Eden Project International, said: “We are really hoping we are able to get some spades in the ground by the back end of next year.”

Bellamy stated it would likely be a “two-and-a-bit-year build,” “potentially opening in the late Spring of 2023”.

He revealed a public consultation would commence in the summer, and the charity aimed to submit environmental statements and planning applications early next year.

Lancashire Enterprise Partnership, Lancaster University, Lancashire County Council and Lancaster City Council have each provided £250,000 towards design and planning costs in addition to £100,000 from the government.

David Harland, chief executive of Eden Project International Ltd, commented: “This is an important milestone for Eden Project North. Having a positive impact on the internationally significant environment of Morecambe Bay is fundamental to our vision for this project.

“This report is the next step towards making Eden Project North a reality.

“We have been overwhelmed by the support we have had from the local community and we look forward to working closely with everyone in the coming months and years as Eden Project North takes shape.” 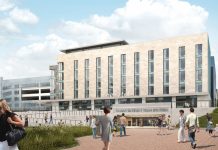