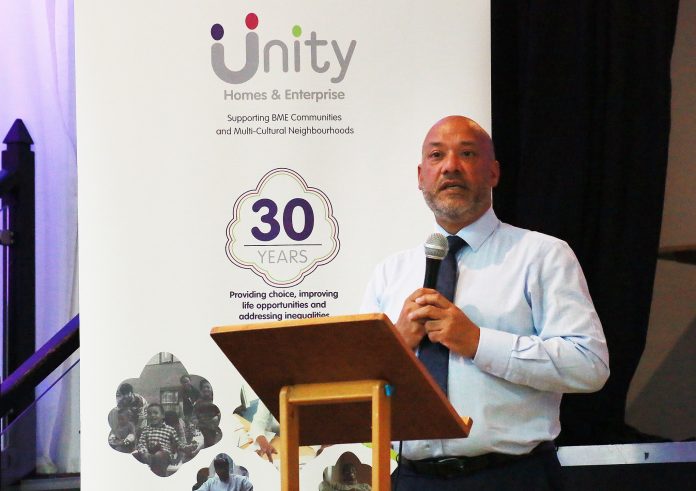 Chief executive of Unity, a prominent BME-led housing association, called on Westminster politicians to “grasp the Brexit nettle”, to prevent local communities experiencing a reality of chaos as the UK’s exit from the EU swiftly approaches

In a New Year message, Ali Akbor, who has led Leeds-based Unity Homes and Enterprise for two decades, warned that fears over a no-deal Brexit or second referendum were causing deepening anxiety amongst tenants.

Mr Akbor emphasized MPs have an overriding responsibility to the community to establish a plan of action, regardless of internal political disagreements.

“Unity is not a political organisation and has no desire to become one,” Mr Akbor said.

“But our staff are close to the people we serve and it is clear that the decisions politicians make in the coming weeks will impact on tenants’ lives for years to come.

“I am particularly concerned about the aggressive tone and negative rhetoric we have heard from both sides of the Brexit debate, and the dangers this poses to community cohesion. That is why I am wary of the damage a second referendum campaign may inflict.

“Our tenants wish to live in a society at ease with itself, and side by side with people respectful of each other’s differences. This is not helped by politicians who advocate a ‘my way or no way’ doctrine and who seek to denigrate those who hold a different viewpoint to their own.”

The Unity chief executive – also secretary/treasurer of BME National, a collective of over 60 BME housing associations – said it was “essential” that a Brexit compromise was reached in Westminster.

“The wheels of government have ground to a halt,” Mr Akbor said. “That’s not a criticism, it’s a fact. The Integrated Communities Strategy Green Paper and the Social Housing Green Paper are gathering dust in Whitehall. We need to be moving on to the next stage on both.”

Mr Akbor said there were fears about the damage that Brexit uncertainty was doing to local businesses.

“Unity Enterprise, our not for profit subsidiary, hosts more than 80 businesses across three locations,” he said.

“The ability of these companies, many of them start-ups, to expand and create new employment opportunities is being restricted because of diminishing confidence amongst entrepreneurs. Existing jobs could also be at risk. These businesses need greater clarity to enable them to plan for the longer term and make investment decisions.”

Mr Akbor said he was proud that Unity had utilised its 2018 Annual General Meeting as a platform to pay tribute to the bravery of BME Commonwealth soldiers in the First World War, which ended 100 years ago.

“Those soldiers fought for our freedom over oppression,” he continued. “They played their part in creating the rich fabric of the modern United Kingdom. Millions of British citizens of BME origin now form a central plank of our nation. We need to continue to reach out, not pull up the drawbridge.

“As Brexit approaches, our politicians should follow their shining example.”