In 1997, Gordon Brown proudly declared: “I will not let house prices get out of control and put at risk the sustainability of the recovery”

Based on supply and demand alone, there was no basis for this dramatic price inflation. After all, the population had not increased threefold, yet price rises would suggest it had.

During the run-up to the financial crisis of 2008, deregulated financial instruments ushered in under the Thatcher and Reagan administrations, and willingly adopted throughout the Blair years, flooded markets with cheap credit. This credit found itself a home in speculative asset bubbles like the stock and housing markets, which drove up prices.

By the mid-noughties, property speculation had become a national pastime. The private rental sector in the UK grew from 9.4% of the housing stock in 2000 to 19% of a considerably larger overall stock by 2014 – that is, the number of units rented privately increased by almost 125% over a 15-year period.

The collapse of the US subprime mortgage market in September 2008 exposed the fragility of the global financial system. Crucially, however, when the housing bubble popped, the risk-taking of reckless lenders and investors was underwritten by governments’ and central banks’ co-ordinated interventions. Central banks the world over indirectly pumped property markets with yet more credit using quantitative easing and sustained low interest rates in an attempt to stimulate markets. House prices were subsequently prevented from falling to the levels that they otherwise would have in a free market.

Thus, “The Housing Crisis” was born, creating a socio-economic chasm between property owners and those yet to get on the ladder. The distributed wealth of the UK’s housing stock was transferred from government to private ownership via the sell-off of council housing, and was concentrated into fewer hands as landlords acquired multiple properties. By April 2018, private landlords owned an average of 1.8 buy-to-let properties each – rising for the fifth consecutive year.

Hence, the housing crisis has never been an issue of insufficient bricks and mortar, but rather an issue of quality and distribution, precipitated by ill-regulated financial markets.

Yet, the cause of the crisis quickly became reframed as a failure to build enough homes. Policymakers, the media and charities alike began to espouse the idea that the solution to excess prices was to build more homes.

England has around 200,000 empty properties; sufficient to address the estimated 277,000 homeless in England. The government has vowed to build 300,000 additional houses every year until the mid-2020s.

So, if this additional housing isn’t required to address homelessness per se, what is it for?

It would seem then that this volume of houses is intended to attenuate cost, being well in excess of that needed to provide a roof for all.

As we learned from the 2008 financial crisis, however, it was not demand that caused prices to rise, but instead an excess supply of credit. Accordingly, an increase in the supply of housing stock will not necessarily reduce prices if the supply of credit is sufficiently relaxed. This conflation of issues is dangerous. By misdiagnosing the problem as an issue of insufficient supply, inappropriate responses have occurred, leaving a damaging legacy.

Analyst, Ann Pettifor, comments: “It’s speculation in the property market that is fuelling stratospheric house prices, not shortage of supply. When the ‘fuel’ of private capital, mortgage credit and cash from the bank of mum and dad is supplemented by government subsidies and tax breaks, house prices rise.”

Local authorities have been tasked with hitting government new build targets, and large-scale housebuilders have been more than willing to cash-in on the feeding frenzy.

Last year, housebuilder Persimmon famously attempted to pay their chief exec Jeff Fairburn a bonus of £110m, following record pre-tax profits of £1.09bn. The housebuilder has seen profits triple since 2013, when the government’s Help to Buy scheme was introduced.

In spite of these record profits, housebuilders continue to insist that building to sustainable levels of energy efficiency is financially unviable and, to date, local authorities under pressure to deliver units have bought into this misconception.

There is, however, a bigger concern on the horizon. The Committee on Climate Change report UK Housing: Fit for the Future? claims that emissions reductions from the UK’s 29m homes have stalled, while energy use in homes increased between 2016 and 2017. It further claims that we will not meet our legally binding targets for emissions reduction under the Paris Agreement without near complete decarbonisation of the housing stock by 2050.

At present, there is no agreed solution to modify the built environment such that it can operate in a carbon neutral fashion by 2050. The problem can be made substantially less dire, however, by not adding yet further energy demand at this critical time. 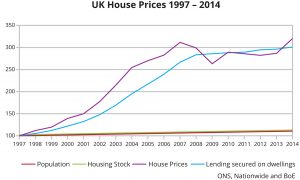 Chancellor Phillip Hammond has announced plans to introduce a Future Homes Standard by 2025, requiring new homes to have no gas connection, use low-carbon heating and be ‘energy efficient’. This would come into effect following the planned construction of 1,800,000 additional high energy demand homes, most of which will be heated using gas.

This dash to build large quantities of potentially unnecessary, inefficient housing will create an infrastructure time bomb for current and future generations by leaving a legacy of high energy demand, high emissions housing which will inevitably require costly modifications or demolition within a short time frame. Better consideration of the medium to long-term implications would therefore be well advised to reduce the risk of widespread energy security problems and climate-related public health issues, such as overheating, in the coming years.

Richard Tibenham is the director of Greenlite Energy Assessors and is an associate lecturer of building physics at the University of Lincoln.