Working alongside architects Feilden Clegg Bradley, Max Fordham have helped to complete the first major building services renovation to the site since its opening in 1967. It is the first time that the famous concert hall has been closed for an extended period.

Max Fordham have implemented a number of major changes to the building. They have replaced the auditorium air conditioning systems. Reinstating cooling of the Queen Elizabeth Hall for the first time in over 30 years, the air flow has been reversed. Originally supplied from the ceiling of the auditorium, the conditioned air is now supplied from below the seats, creating a comfortable environment for the audience. Conditioned air is supplied only where it is needed, minimising energy use.

Removing the old ductwork from the ceiling voids has created space for the retractable lighting rig, an updated and high spec piece of equipment which now sits neatly in the roof.

Stuart Humber, who led the team from Max Fordham, said:

“Heating and ventilation systems tend to stay the same size over time. In contrast, audio and visual systems expand as the tech develops and modernises. The new theatre equipment that a venue like this demands is far bigger than it would have been in the 60s, when the concert hall was intended to host piano recitals and ensemble orchestras. Much of our work at Queen Elizabeth Hall has been about making better use of the existing space to create room for the best equipment.”

The refurbishment work took over two years to complete. Initial evaluations of the site took place while the building was still in use.

Humber added: “Historical buildings pose challenges that are not always obvious in the first instance. Simultaneously preserving and updating a building such as Queen Elizabeth Hall is a complex process. When you start unpicking things to look beneath the skin of a building, new complications arise. We relish the opportunity to take on these challenges and are proud to work on projects like these.”

As well as M&E Engineering and Sustainability Consultancy, Max Fordham are providing Soft Landings Consultancy, which will see them monitor the impact and usage of the work they have done on the building. Particularly with buildings so complicated and bespoke, the Soft Landings process is crucial to ensure the users of the building get the most out of the new systems. 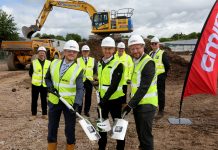