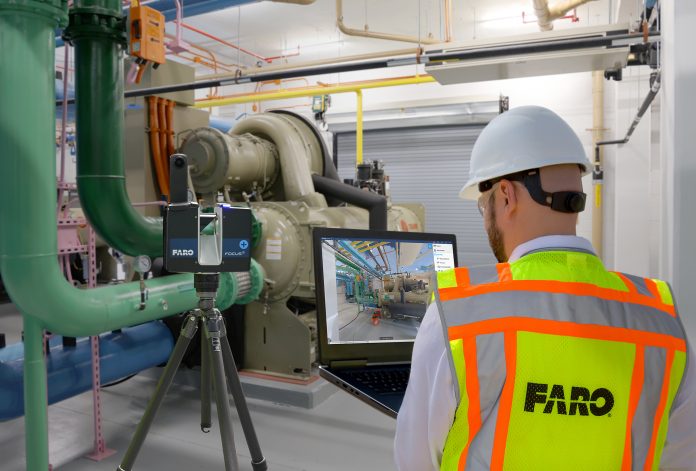 As the UK looks to life after Covid, MEP professionals are turning to reality capture technology as part of the great urban planning rethink, says Jerry Hardy, director of marketing at FARO

As the UK, like the rest of the world, grapples with ongoing cases of Covid-19, planning for a “new normal” has continued.

In the City of London, for instance, (the 1.1 square mile ceremonial core of Greater London) office space planning applications were already up to 80% of the same volume in the first three months of 2021 as they were from the year before.

Meanwhile, the Bishopsgate twin skyscraper project remains on pace for its autumn opening, boasting enough room to accommodate some 17,000 workers. Longer-term, the City plans to develop an additional 1.3m sq ft of shopping space by 2036 as the Square Mile hopes to transition into a more diverse, vibrant, mixed-use neighbourhood.

Achieving such lofty construction goals is no easy task. And readying buildings for the post- pandemic surge of bustling interior spaces requires a significant investment in mechanical, electrical and plumbing (MEP) systems. This includes new projects like Bishopsgate, as well as the retrofitting of older buildings for HVAC purposes, along with redesigned outdoor public spaces.

Increasingly, MEP contractors are turning to a bevvy of reality capture technology – hardware and software solutions – that enable companies to streamline costs, enhance the efficiency of their workflows, accelerate project completion and, perhaps most pressing, navigate the ongoing health and safety restrictions related to Covid-19 while preparing for that long-term “new normal.”

“Reality capture has seen a significant increase in adoption within the MEP space in recent years; I’m still amazed by the sheer scale of these rabbit warrens of pipework and equipment, all of which are pushing towards being correctly documented or measured in line with the digitisation of the construction,” Atkinson explained.

“Technologies such as laser scanning and reality capture allow these environments to be densely mapped out at the touch of a button, in no time at all.”

The business of doing business, preserved

These environments are also being mapped out more safely than ever before. Even areas once deemed inaccessible can now be captured as 3D laser scanners take millions of measurements every second. In contrast, manual measurements of physical assets are time-consuming, tedious, error-prone endeavours and require at least double the amount of staffing to complete the task.

For MEP professionals, reality capture has been nothing short of a miracle technology, allowing those in the business to keep doing business with as little disruption as possible. While many on a project team have been prevented from accessing a site due to lockdowns and restrictions, remote project management and monitoring via laser scanning has been able to persist. Not only that, but the lack of other personnel onsite has presented a unique opportunity where fewer crowds make building accessibility easier still – and with disruptions to in-process business operations kept to a minimum.

Lacking that hustle and bustle, a one-person team (taking Covid precautions) can map the as-built environment at a specific date and time. This data can then be shared with the rest of a design team through today’s cloud-based data-sharing platforms. Access through such platforms allows design teams to see exactly what was going on at a particular time, which project and sub-projects are progressing, and if there are any issues that should be addressed. Some of these software solutions include a virtual reality headset, allowing first-person perspective of the physical site – even if the operator of said VR device is thousands of miles distant from the actual project, according to Atkinson.

The bottom line: reality capture provides the nearest as-built representation of the physical environment better than any physical model could ever achieve. Moreover, the technology also acts as a starting point to utilise the point cloud data in new workflows and processes that can add value and additional services to MEP engineers, as well as their clients and their subcontractors.

To be sure, this is not the first time Greater London has had to reinvent its artificial physical spaces and its supporting infrastructure in the wake of a biological crisis. In 1854, a cholera outbreak on Broad Street (now Broadwick Street) in Soho killed over 600 people until Dr John Snow correctly determined the source of the intestinal infection (a baby’s nappy washed in the community well) and whose findings led to new health and safety measures ensuring that Londoners’ water was safe to drink.

As the UK and the world looks to emerge from the current global pandemic, new ways of building, new ways of ventilating, new ways of spacing employees and their work, and new ways of accessing and designing mechanical, electrical and plumbing systems all will need to be addressed. For now, much of that as-built data will be captured with human-operated 3D laser scanning equipment.

But what about the future – a future where Covid’s lingering tendrils will still encourage at least some measure of remote work and distanced data acquisition? In this near future, Kristopher Atkinson feels strongly that the environment will be primed for the digital twin concept, using real-time monitoring and sensor data of physical assets in digital models, along with autonomous and semi-autonomous robots, all-but “running the show.”

“As discussions around digital twins and the amount of data we are now collecting increase, I still see the fundamental workflows of reality capture playing a major part in project management, but I can also see a movement towards automating these processes and utilising the power of cloud computing,” Atkinson said.

“Take, for instance, Boston Dynamics, a US-based company and its quadruped SPOT robot. Equipped with reality capture scanning technology the robot dog can walk around build sites, stopping from time to time to carry out a scan. By the time the construction teams arrive back in the morning the environment can be mapped out entirely. It’s only a matter of time before the construction site is seeing automated robots, working alongside us.”

Until that time comes to pass, the great urban planning rethink will continue in places like London and other metropolises around the world.

So even as the fickle British weather turns foul in the autumn months ahead, buildings like 8 and 22 Bishopsgate, along with their MEP innards, will be proving that the future of city living – and city working – remains bright.