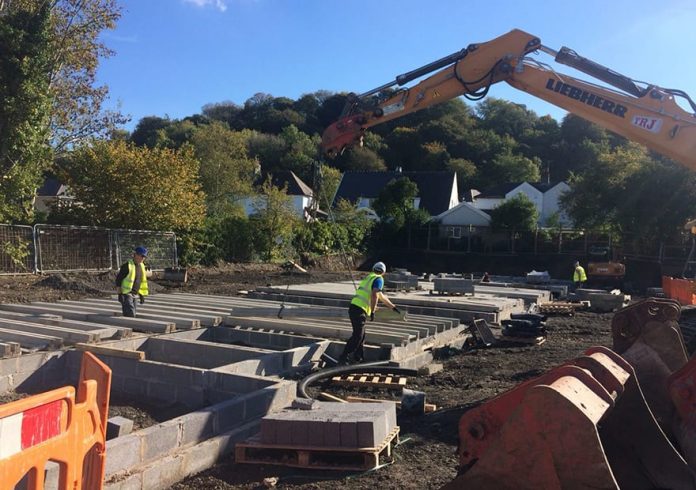 The first development of Active Homes that are able to store, generate and release solar heat and electricity, are now under construction in south Wales

The 16 social homes on the development will act as mini power stations able to generate around 80% of the energy they consume and reduce tenants’ energy bills by at least 50%.

Active Homes will have an airtight structure of prefabricated structural insulated panels (SIPs), and will generate energy from the sun in two ways: a perforated steel “solar wall” which will soak up 50% of the solar heat energy hitting the surface, and solar photovoltaics on the roof to generate electricity.

Jonny Williams, business development director at SPECIFIC and project lead for Active Homes Neath told BIM+: “We expect the homes will generate about 80% of what they consume, based on a good estimate of all loads, including plugged-in appliances, not just regulated loads listed in Building Regulations.

“We have tried to be as upfront as possible about the whole process of power generation storage and use, if batteries are full it will be possible to channel power back into the grid, there is also provision for electrical vehicle charging for a ‘pool’ of one or two cars.”

The south-facing wall of each home is fitted with perforated steel panels that can collect 50% of solar heat energy hitting the surface. The system works by heating the layer of air on the outside of the steel, which is drawn through the perforations into a cavity then ducted off into the building.

Williams added: “Pobl had workshops with its housing and asset management team and the tenants to explore any technical issues and any uncertainties and fears they might have. All info and training for tenants had to be kept simple and fit on just a side or two of A4 paper.”

Active Homes Neath is due for completion next summer, 10 of the houses and flats will be monitored for 12 months post-occupation to gauge how systems are performing.