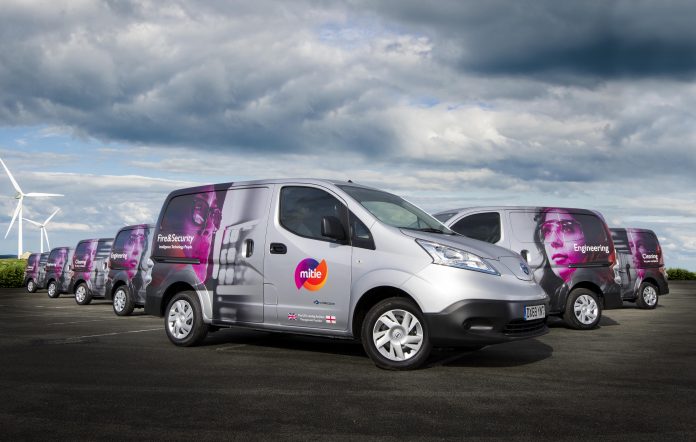 Nearly 100 electric cars have already been rolled out to Mitie’s employees in just four months, and now they have officially begun rolling out their first electric vans

Mitie will switch 20% of its car and small van fleet to electric by 2020 as part of plans to build the UK’s largest fleet of electric vehicles.

With some 200 Mitie electric vehicles (EVs) due to be on the roads by the end of this year and a further 300 already on order, Mitie is on track to meet this target.

Given the large scale of their target of 700 EVs by 2020, Mitie chose to start with smaller deliveries of vehicles from a range of manufactures to test and learn. This has been rapidly amplified by increasing to larger volumes for widespread rollout across the UK.

Mitie is also investing in the UK’s EV charging infrastructure and will be installing around 800 electric vehicle charge points at employees’ homes, Mitie offices and customer sites.

Given that its fleet is responsible for 93% of its carbon emissions, Mitie’s transition to electric vans and cars will have a dramatic impact on its carbon footprint. The 20% by 2020 commitment alone will save 4,000 tonnes of CO2 a year.

“Given that we run one of the UK’s largest fleets, with our 20% by 2020 pledge I’m proud that we’ve already set an ambitious target that sees us at the forefront of EV adoption.

“While we’re well on track to meet our goals, we all need to go further faster, if we want to limit the impact on climate change. We’re already looking ahead past cars and small vans, to see how we can get every other Mitie vehicle, from larger vans to scaffolding trucks and gritters, switched to electric as soon as possible.”