Becoming thermally efficient and wasting less energy has become very important, not only on an environmental level, but also economically.

There is also growing importance of good to high EPC (Energy Performance Certificate) ratings to ensure buildings meet acceptable standards for letting and also enhance their market value. High energy prices have put budgets of all sizes under strain and longer-term indicators suggest that energy prices will remain high.

Buildings also account for more than 40% of all carbon emissions so any method of reducing this through controlled measures or better insulation is very desirable. Secondary glazing is a well-established method of greatly improving insulation within existing buildings.

Selectaglaze has a range of tested products that can reduce the U-value of a building to around 1.8 when coated in low emissivity glass. With the Pilkington Spacia glass in the Series 25 vertical sliding unit, it can be reduced down even further to around 0.8.

All units are designed and expertly installed with brush seals, or compression seals for hinged panels, to ensure the tightest fit, dramatically reducing air infiltration to help eliminate uncomfortable drafts.

An historic listed Georgian townhouse in London’s Bloomsbury has been transformed into a comfortable, peaceful and energy efficient home that approaches Passivhaus EnerPHit standards. The client wished for a home that used as little energy as possible and offered the most comfortable environment.

Robert Prewett of Prewett Bizley architects approached Selectaglaze and originally proposed a totally new design but coincidentally the company was both developing a new sash window design and trialling Pilkington’s Spacia thin vacuum units, which have a centre pane U-value of 1.0. The resulting Series 25 window proved perfect for the project as it offered high sealing efficiency, a very low U-value and a discreet frame with a specially developed slide catch that allowed shutters to fully close. The home now has airtightness close to one air change per hour at test pressure which demonstrates that the secondary glazing is performing very well. 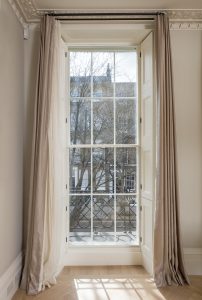 119 Ebury Street is situated in the central location of Belgravia. It was originally built as a single dwelling and was then renovated into a hotel. Recently it has been converted into three energy efficient apartments, which led to it becoming the first listed building to receive a BREEAM Outstanding rating in the UK.

Grosvenor asked Selectaglaze, based on their long working relationship, for an advanced secondary glazing solution.

Selectaglaze installed a total of 18 Series 25 units, which are a vertical sliding system ideal for treating larger windows that require thicker glass. The units were glazed with Pilkington Spacia, which is an evacuated sealed unit only 6mm thick with a centre pane U-value of 1.0. The secondary glazing treatment dramatically improved the overall U-value and assisted in achieving high airtightness levels.

The £22m remodelling and refurbishment of the 1930s civic building and 1970s office extension for Wiltshire’s County Hall in Trowbridge was undertaken to consolidate the majority of Wiltshire Council’s 95 offices into four hubs.

A major requirement of this development was to reduce the energy consumption by 40%, making it the first refurbishment project within the UK with a BREEAM Excellent rating. The traditional single glazed sash windows were retained as an important architectural feature of the 1930s building and secondary glazing was chosen as a way of dealing with both the heat loss through the glass and discomfort caused by drafts.

270 bespoke frames were fully fabricated offsite allowing rapid installation to all four floors in phases to suit the contractors programme. The result is a more energy efficient and comfortable environment.

Established in 1966 and a Royal Warrant holder since 2004, Selectaglaze has vast experience in working with all types of buildings throughout the UK.