Given that demographics look at the size, structure, movement and rates of change of human populations, this topic is likely to have an impact on almost all industries and disciplines, nowhere more so than for building services

Numbers matter – which is why economists, commentators and lobbyists devote more attention to China and India than they do to, say, Chile or Ireland. Large-scale changes in population are also likely to have social, cultural, economic and political implications.

Challenges raised by a growing population are very different to those faced by a shrinking one. Similarly, a country or region with an old or ageing population will have different needs to a predominantly young one.

This White Paper summarised some of these key trends – specifically on the built environment and building services.

Consequences of population growth or decline for building services

Consequences of an ageing population for building services

Smart building technology has a key role to play in addressing both of these needs.

Henry Lawson, BSRIA’s Senior Market Research Consultant, BSRIA’s World Market Intelligence Division, commented: “The proportion of the UK’s population aged 65 and above has roughly doubled over the past 80 years and the share of people aged over 85 has risen even faster.

“BSRIA has been researching smart home solutions since 2010. We are finding an increasing focus on solutions to help those who are elderly, in poor health or disabled to remain in their own home for longer. This can be anything from monitors and alarms to ‘companion’ robots.

“To create a future that works, our buildings and the way they are designed, built and operated are going to need to change at least as much as the people who will be inside them.” 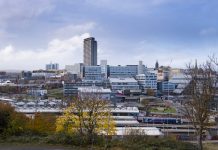