The figures revealed that construction enjoyed one of the largest increases in its share of total apprenticeship starts of any sector during the 2016/17 academic year, as compared to 2012/13.

Smaller construction firms – those with up to 50 workers – were the largest represented in the sector, accounting for around 68% of the total apprenticeship starts in the industry.

Whilst it appeared that health and social work apprenticeships appealed more to women (85%), the construction sector lacked female representation.

Karen Jones, HR director at Redrow and a non-executive director of the Construction Industry Training Board (CITB) said: “It is very promising to see the construction industry lead the way in the number apprenticeship starts in the last academic year.

“However, today’s data also shows that 88% of construction starts were male. With Brexit sharpening concerns that the construction skills shortage will deepen, it is more important than ever that we reach out to young people of both genders, and ensure they are educated in the different career paths that construction can offer.

“Our most recent apprenticeships report revealed that just over half (56%) of young women had received careers advice on apprenticeships, compared to 70% of young men. It vital that schools help break the gender stereotype and show that construction offers a rewarding career path to those from both sexes.

“Today’s data also clearly demonstrates that larger employers still have an advantage over SME’s when it comes to taking on apprentices. Hopefully, Philip Hammond’s move earlier this month to allow large employers to transfer a quarter of their apprenticeship levy funds to smaller businesses will go some way to alleviate this.

“Successive governments have however made great progress in the content and funding of apprenticeships.

“Going forward, there is room for improvement which can be achieved through greater collaboration across business leaders and government, and a more employer-friendly approach to the government’s levy.” 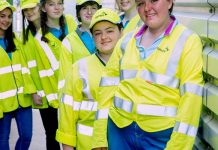