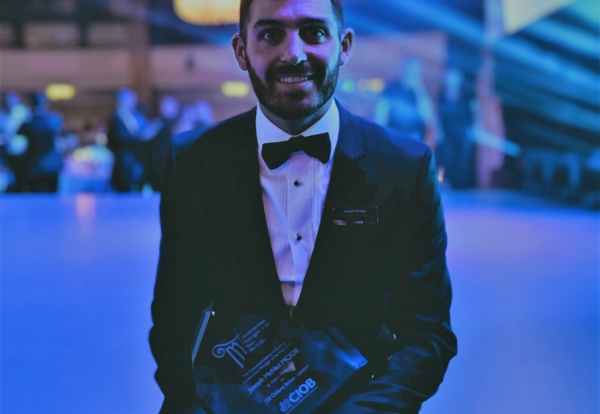 Joseph McNeil’s was awarded Construction Manager of the Year as the result of his leadership on complex refurbishment work at 120 Oxford Street, London.

Sir Robert McAlpine was offered the refurbishment work following the failure, two weeks after site start, of the more competitively priced contractor that had originally won the tender. Joseph McNeil took on his first role as project manager without any prior knowledge of the scheme and with the lower storeys of the building already vacated, the hoardings up and the client keen to get the works restarted as fast as possible.

McNeil quickly mobilised his team and got the early works packages moving. Even more importantly, he challenged the demolition methodology (in a building that had sensitive neighbours as well as remaining tenants) of diamond-saw cutting without percussive breaking. His successful proposal to use hydraulic crunching instead achieved substantial programme and cost benefits, as well as disruption-minimising low levels of noise, and allowed a contract agreement to be finalised.

He overcame the substantial challenge of managing an incoming tenant’s requirements that conflicted with the specification for the screeding. Joe McNeil’s proposal of a mix of repair works, levelling compounds and new screeds represented a significant saving on the tenant’s original request for the removal and replacement of all existing screeds. It also accelerated the programme, allowing for an earlier unit completion and tenant occupation date.

By working closely with his supply chain, McNeil was also able to offer improvements on the design team’s proposals. The most significant was for the reconfiguration of the building’s main power supplies to feed the new retail units.

The direct benefit the power solution brought the client was a relationship of trust and this was one of the principal drivers for the extensive contract growth (over £3m in variations) on the project.

Stephen Bradbury MCIOB, one of the judges for the refurbishment category, said: “This was Joseph’s first project as the lead. He delivered with passion and took ownership from the start on a tricky scheme in a difficult location.

“Joseph demonstrated a maturity of thought and decision making beyond his age or experience. This project had many opportunities to go wrong, but the detailed and methodical approach taken by Joseph made sure this was a success – and he delivered to such a high standard that Joseph has subsequently negotiated another project with the same client.”

When announced as category gold medallist for refurbishment, Joseph McNeil was asked about the challenges on the project. He said: “The discoveries and unknowns are among the biggest challenges. Not the client, honestly!”

On it being announced that he had been named Construction Manager of the Year and was taking home the trophy, he said: “It’s amazing. Now I’m going to be on the Wall of Fame in the corridor next year! I want to thank my team and I want to add that the ladies on my table were instrumental in the success of my project; certainly, three of the most influential people on my work are present and I want to thank them.”

CIOB chief executive Caroline Gumble, said: “The Construction Manager of the Year competition has always been about highlighting the best of leadership and talent in our sector.

“All of the CMYA medallists this year have been incredibly impressive but many congratulations to Joseph McNeil as he really stood out for the judges with a combination of professionalism, brilliant communication skills and dedication. He’s a shining example of a construction manager making a difference not just to a client but also to the local community and, by demonstrating the best of what we as an industry can do, to the wider construction community.”

More information about all of the finalists can be found here.