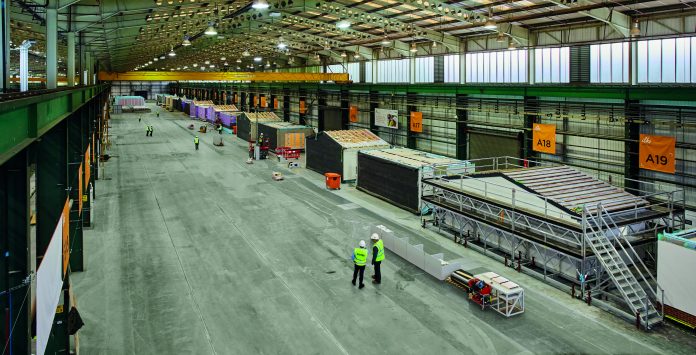 In November, Homes England announced £30m to boost production at ilke Homes’ factory, marking the first time a UK government agency has directly invested in modular housing production. Executive chairman Dave Sheridan discusses the importance of the deal in the wider context of efforts to tackle the housing crisis

Since his landslide election victory in December, Boris Johnson and his returning party have doubled down on their commitments of inward investment to boost industry, infrastructure and transport, repaying their newly found voters in the North. Prior to the election, housing minister Esther McVey announced the government’s ambition to create a “Construction Corridor” in the North of England to speed up the delivery of zero-carbon homes and build a £40bn-a-year industry that would create 80,000 new jobs.

Commitment to modern methods of construction

The government’s initiative kicked off by investing £30m into our factory. The money will boost our factory’s production capacity to deliver 2,000 high-quality, sustainable homes a year – increasing to 5,000 within the next five years.

As well as demonstrating Homes England’s ongoing commitment to modern methods, the deal will be significant in the industry’s efforts to tackle the UK’s housing crisis.

With housing affordability at an all-time low and over one million families currently sitting on council waiting lists, there has never been a more important time for an innovative solution to housebuilding. As part of the Conservative’s election campaign, the party pledged to deliver one million homes over the next five years.

However, although things are looking up for housing delivery, with the latest government figures revealing that the number of new homes created in England hit its highest level in 30 years between 2018 and 2019, the industry is still 60,000 shy of the official 300,000 homes a year target.

Public sector investment will be crucial in ensuring housing supply keeps pace with demand. Just like the automotive or aerospace industries, offsite manufacturing demands high, upfront investment to acquire the specialist technology needed to manufacture at scale. This is in contrast to traditional construction, where housebuilders are often able to release funding at different stages of the build cycle.

Public sector investment also has the potential to speed up the delivery of energy-efficient housing. High energy prices have placed a worrying proportion of the British population in fuel poverty, with the most recent government figures estimating that there were 2.53m fuel-poor households in England in 2017, roughly 11% of the total number of households.

Without the kind of inward investment we received from Homes England, Britain will not be able to achieve the capacity needed to tackle the housing crisis.

Investing heavily upfront in capital intensive manufacturing capability will not only improve the UK’s capabilities to deliver much-needed housing but also will help address growing skills shortages in construction. This is important because, without a workforce, homes won’t get built.

Following the 2008 recession, the construction industry, worth over £90bn annually to the UK economy, shed 140,000 jobs. Now there is a new challenge on the horizon.

The industry is faced with a rapidly ageing workforce with the rate of retirement set to increase. Almost a quarter (22%) of the workforce are over 50, with 15% in their 60s. To make things worse, the industry is also losing out to competing sectors where work is seen as more stable and pay is more competitive.

We’re working to mitigate risks posed by these shortages. Thanks to Homes England’s funding, we’ve been able to heavily invest in the ilke Academy: our onsite training facility where we’re training up the next generation of housebuilders to manufacture homes in a factory in a bid to ease the construction skills crisis.

Welcoming people from all walks of life, including military veterans, ex-offenders, school leavers and women – all groups currently under-represented in the construction and manufacturing industries. The ilke Academy is allowing us to teach new recruits and existing staff a range of vital new skills including engineering, manufacturing and design.

Promoting skills such as these will be vital in breaking down outdated misconceptions of the industry by demonstrating that housebuilding can also be the kind of tech-savvy business the younger generation is increasingly drawn towards.

By manufacturing offsite, we’re able to engineer our homes to ensure they are airtight. Compared to a new build home built conventionally, homes manufactured offsite are 20% more energy-efficient, increasing to 50% when compared to the average UK home.

With our homes costing as little as £1 a day to run, British households could make huge long-term savings on their heating bills, saving on average over £700 a year.

As we look ahead to the new decade, it’s quite evident that offsite manufacturing will have an enormous part to play in delivering the high-quality, sustainable homes that British families are yearning for – and the future is looking bright.

The latest figures from the ONS revealed that a housebuilding boom towards the end of 2019 helped the UK construction industry grow at its fastest pace in a year. But, if we are to reverse the fortunes of housebuilding, which has long been plagued with issues surrounding quality and the industry’s inability to deliver, modern methods must sit at the heart of the solution.