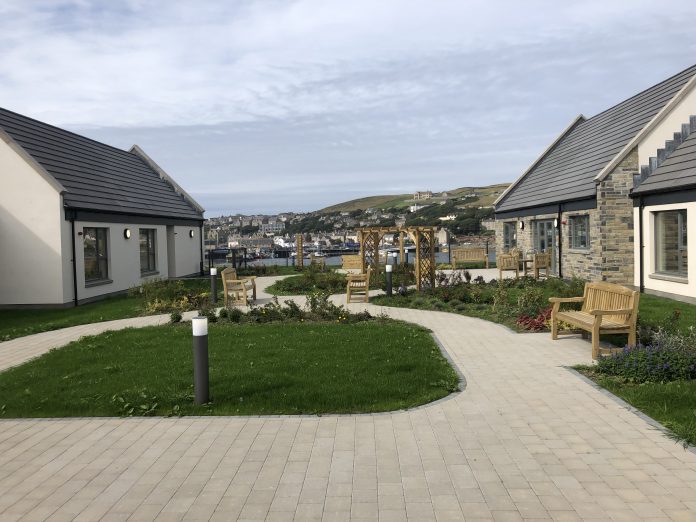 Timber frame manufacturer, Scotframe’s role in constructing the roof – and why it may be the only one of its kind in the UK

This new build care home in Orkney opened earlier this year and is designed to accommodate up to 40 people. It enjoys panoramic views west across the bay.

The name – chosen by the community – is fitting. In Viking times, the anchorage where Stromness now stands was called Hamnavoe, meaning “peaceful” or “safe harbour”.

This project was procured by Orkney Islands Council to replace the aging St Peter’s House facility with a new modern home to provide high dependency care.

Hamnavoe is designed to look like a cluster of new, single-storey houses, all of which take full advantage of panoramic views looking towards Stromness. The design also meets the University of Stirling’s Designing for Dementia standards.

The building, extending to 2,900 sq m, is open in design, giving residents freedom to move around easily. There are no hazards, and stairs and thresholds are low profile for ease of access everywhere. Large windows reveal stunning westward views over Stromness bay and harbour.

The main contractor for the construction of Hamnavoe House was Orkney Builders (Construction). Initially, timber frame manufacturer Scotframe was contracted to supply its Val-U-Therm PLUS wall panels to provide maximum thermal performance. Both organisations have worked together on projects for over 20 years, thus a great deal of trust and mutual respect has been established.

In this instance, the timber frame manufacturers’ contribution ended up being so much more.

The story of the roof

When the original specification for the new care home was supplied to Scotframe, the team priced the job “as stated”. This included Scotframe’s proprietary Val-U-Therm PLUS wall panels and a standard trussed roof. 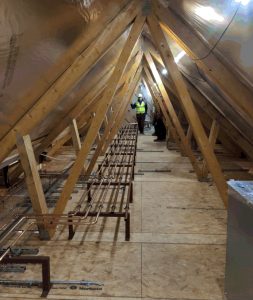 Two different layers of rigid insulation board were requested, one cut and fitted between the truss top chords, and a second continuous layer above the rafters, on top of the trusses. The intricacy of the proposed construction method and its heavy reliance on site workmanship were increased by requirements for an M&E access walkway within the truss space for future maintenance of the sprinkler system and other M&E services.

From an early stage, the Scotframe team could see significant site challenges with the original roof design in terms of its buildability, likely thermal performance and whether the construction timescales were realistic, given the site complexities for all the subcontractors involved in the project.

As James explains: “It was a considerable design challenge because any changes made to the kit specification had a knock-on impact on other components of this complex structure.

“We had to bear in mind that a sprinkler system, complete with heavy tanks, was to be located within the roof truss space, which required additional load bearing support.

“However, the Scotframe team was confident that a more efficient solution could be achieved which delivered both the thermal performance which Orkney Islands Council – rightly – insisted on, coupled with the increased buildability which Orkney Builders desired.

“We got everyone round the same table for a constructive discussion to problem-solve the structural detailing. By the end of the day, we had agreed a proposed new structure that would enable the roof to be built using our Val-U-Therm PLUS roof panel system, coupled with girder truss structural supports.

“The next step was a technical meeting in Orkney to address the final hurdle – agreeing the best thermal solution for the project, along with subsequent specification and detailing.”

The inclusion of pre-decked floor cassettes within the Scotframe kit – between girder trusses – meant that subsequent subcontractors and trades who needed to work above or within roof areas already constructed, were able to do so – while joiners continued erecting floor and roof panels in future zones, speeding up the overall site construction time considerably.

Scotframe sales director Malcolm Thomson, said: “This breakthrough gave everyone confidence that our proposed solution would work and the council gave us the green light to proceed with design and manufacture.

“It also demonstrates the added value that Scotframe brings to the table, through early involvement and technical expertise in the specification and design of timber frame structures, be it large residential or commercial projects.”

The project went on to be completed on time and on budget.