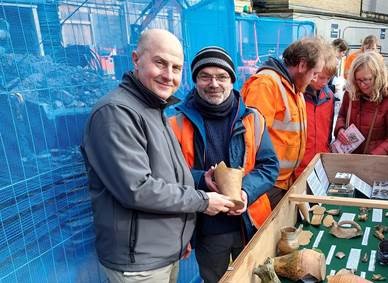 Archaeologists who uncovered Oxford University’s ‘lost college’ believe that they have discovered a 4,000-year-old ancient burial mound beneath it

Evidence of the ancient burial mound comes as a fragment of skull and part of a human jawbone with teeth were unearthed.

The findings by Oxford Archaeology follow their recent discovery of part of the limestone foundations of the former St Mary’s College, which was founded for Augustinian Canons studying in Oxford but was abandoned following the Dissolution of the Monasteries by Tudor monarch Henry VIII towards the end of his reign.

The dig took place on the new student accommodation development by Beard at the Frewin Annexe of Brasenose College.

Ben Ford, Oxford Archaeology’s senior project manager commented: “Locating part of the original massive limestone wall foundation of St Mary’s College was a significant archaeological discovery, and it is exciting to have now discovered underneath it and nearby the remains of an earthwork, a fragment of skull, and part of a human jawbone.

“These intriguing discoveries strongly suggest a prehistoric burial mound was on this site thousands of years before Oxford even existed. The jawbone is robust and clearly from an individual of some stature. The mound is built from reddish colour soils and natural gravel – its survival is very unusual.

“We are now searching for the circular ditch which would have surrounded it, and the remaining bones of the individual.”

Oxford is situated on a long north-south promontory between the River Thames and the River Cherwell, and there have been previous discoveries of Bronze Age barrows, and an earlier Neolithic henge.

Ford added: “In the Neolithic era the Oxford promontory was probably a sacred area, which remained significant in the Bronze Age when it became an extensive burial ground to commemorate powerful and important people from local communities, under large earthen mounds.

“Frewin Hall is one of the oldest buildings still in use in the city, and when we started this project, we hoped to uncover evidence of Oxford’s earliest years as a fortified Saxon town, as well as its later use as the residence of some of Oxfords most powerful Norman families.

“However, it had not been previously documented that there was a prehistoric burial site here. This rare discovery brings a new dimension to what is known about this rich archaeological area, and we are grateful to Brasenose College for making this possible by funding the excavation.”

Guided tours from Oxford Archaeology have opened to members of the public, who were able to see the excavations, from viewing areas especially built for the event by construction firm Beard.

Peter Beilby, project manager at Beard stated: “We stopped work for the day and opened the gates. Despite the weather we received 500 visitors to view the excavations. It was fantastic, a huge success.

“We collaborated closely with the team from Oxford Archaeology during the excavations, and also on the run-up to the event.

“It was decided to construct the viewing areas for the public open day so that people could see the excavated areas safely while getting a full picture of the archaeological work that has taken place.”