Tender prices rose sharply in the first half of 2017, but are expected to fall over the year to Q4 2018. This is against a background of new work output remaining static in 2018, and uncertainty about the effect of Brexit negotiations in the private commercial sector

The current BCIS forecasts are based on the UK’s exit from the EU at the end of the two-year period following the signing of Article 50, followed by a ‘transitional period’ of two years.

Materials costs rose quite strongly in 2017, driven in part by the fall in Sterling exchange rates. Materials prices are expected to rise by 3% to 4% per annum over the forecast period.

BCIS is now assuming that there will be restrictions on the movement of labour following a two-year transitional period. This will impinge on the construction industry from around Q1 2021, as the supply of new European labour dries up. This will put upward pressure on promulgated wage awards as the unions try to keep pace with higher site rates obtained due to the reduced labour pool. Site rates over and above promulgated rates will be reflected in the market conditions factor, putting upward pressure on tender prices.

Wage awards are expected to be settled at around an annual 3% over the first three years of the forecast period, then 5% in 2021 and in 2022.

BCIS has produced two further scenario forecasts based on different assumptions on the Brexit agreement and their impacts on construction demand (see graph). 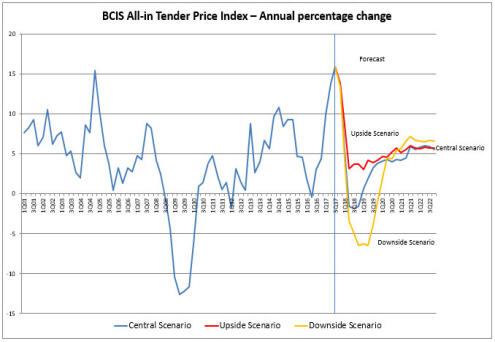