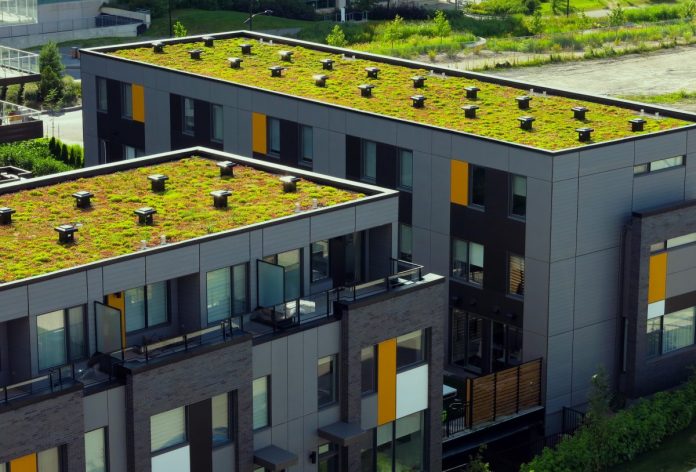 Research by Livingroofs.org has created the first national picture of the market for green roofs. Dusty Gedge, the report’s co-author, discusses its findings and what can be done to further encourage urban green infrastructure

While the report is bound to be of interest to players within the construction industry, it became evident during the research that the market was of interest to institutions and organisations beyond the realm of the immediate construction industry. The most interesting was when I was contacted indirectly by the Committee on Climate Change. The enquiry was whether there were accurate figures for the change in the green roof market on an annual basis, as the committee was considering green roofs as an indicator on how the UK adapts to climate change. Since the launched of the report, we hope that green roofs do, in the future, become an indicator in both the short and the long term.

The market report: A summary

Using metrics decided upon with the green roof industry, data from 2015 and 2016 was analysed to provide a figure on the increase in the market over a year. The headline figure showed an increase of 17%. Interestingly, this figure also equates to the increase in area of green roofs in Central London between 2014 and 2015. This is not so surprising as the research also showed that nearly 42% of the market is focused in the Greater London Authority area. The reason, of course, is London has a distinct policy for green roofs within the London Plan.

Since 2008, green roofs have been an ‘expectation’ in the London Plan. Although, unlike cities such as Toronto or Chicago that tend to get more publicity, it is not a mandatory policy.

However, this expectation has had a significant impact. In effect, the policy has resulted in a majority of developments in the capital having significant areas of green roofs. Livingroofs.org has mapped all the green roofs in the UK, which to 2016 stands at an estimated 1.3m sq m. This puts London on a par with many cities outside of the core markets of Germany, Switzerland and Austria. London is one of the green roof capitals of the world, even if it and the nation just don’t quite know it yet! And it is there because of the London Plan and the activities of the local boroughs at delivering green roofs on smaller projects within the capital, not directly covered by the London Plan.

Do the new metro mayors offer an opportunity for green roofs?

Policy is the key to driving the market across the globe. Although green roofs are focused in the London area, the report shows that there is a spine of activity in the industry, from Southampton to Scotland. The report includes several of the finalists in the green roof award in the National Roofing Awards. These three projects were all delivered outside of London. Interestingly, one of the projects, in Southampton, was a result of the green area factor used by the city planners to deliver a greener central area of the city.

Looking to the future, the new metro mayors could have a similar impact on the green roof market in the short term. Several of these new authorities have similar powers over strategic planning like London has. Therefore, it would be hoped that they would embrace urban green infrastructure for all its benefits and, through policy, stimulate local green roof markets across the country.

The first assessment provides a baseline for future analysis of how much, how many and where green roofs are being delivered in the country. We are looking forward to continuing this work in future years. Green roofs are now a mainstream technology that will be delivered more and more across the nation. The more that are delivered the more our cities will be healthier and resilient to climate change, while showing the economic benefit of nature-based solutions to the wider economy, but also for people and wildlife.

Dusty Gedge is the current President of the European Federation of Green roof and Wall Associations. He works for the Green Infrastructure Consultancy and runs Livingroofs.org, the UK’s number one independent green roof organisation. He is also co-author of the UK Green Roof Market Report – the full report can be downloaded here.