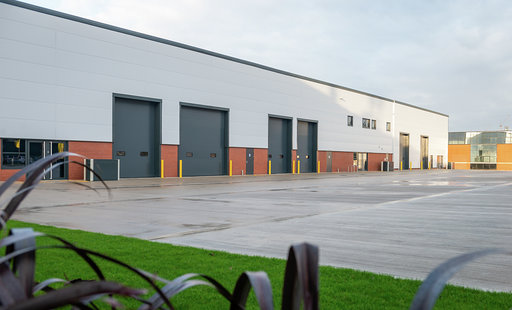 Caddick has finished the refurbishment the old printworks in Leeds to create a complex just 15 minutes from the Majestic, where Channel 4 will be opening its new headquarters

Acquired by Caddick Group in October 2017, the Channel 4 headquarters will provide 110,000 sq. ft. of studio space after extensive refurbishment, including the demolition of the Petty House and removal of abandoned plant machinery and asbestos.

Local contractor CBM Construction carried out the refurbishment which is located on a six-acre site in Leeds. Channel 4’s HQ will be located will also be joined by Opera North as a tenant for a 9,000 sq ft. unit which is being used for storage and rehearsals.

The remaining space will be occupied by Leeds Studios, who are subletting the property from Leeds City Council after a deal with Caddick Group that saw the local authority take the head lease. Leeds Studios will undertake internal fit-outs of the six units they occupy, with the facility due to open in May 2020.

Leeds’ media scene is booming, and the city is the UK’s fastest growing and now an emerging creative cluster following Channel 4’s decision to relocate to the city.

Completion of refurbishment works at the old printworks site follows the start on-site at New York Square. Offering 515 apartments designed and built exclusively for rent, New York Square is the largest city centre residential project to begin construction in Leeds this year and will be managed by Moda Living, Caddick Group’s rental housing brand. Caddick Construction is the main contractor.

Johnny Caddick, director at Caddick Group, said: “There is huge demand for studio space across the UK and in Leeds particularly thanks to the arrival of Channel 4. The broadcaster’s move will prove a massive boost to the city’s economy and Caddick Group is proud to be part of that growth story by transforming a derelict site into a world-class film and TV complex.”

Tony Bashforth from CBM Construction, said: “The refurbishment of the former Polestar Petty works has received a lot of interest locally, due to the connections many in Leeds have to the site. Our works have helped transform the old warehouses into a modern workspace for the 21st century, including new electric car charging points and upgraded services to power the studios.”

Dawn Carlisle, who represented Caddick Group on the granting of the lease, said: “We have a long-standing relationship with Caddick Group and, as two Leeds-based organisations, it has been a pleasure to have played a role in this significant cultural project, Channel 4 in Leeds, which will help to bring wider economic benefits to the region in 2020 and beyond.”