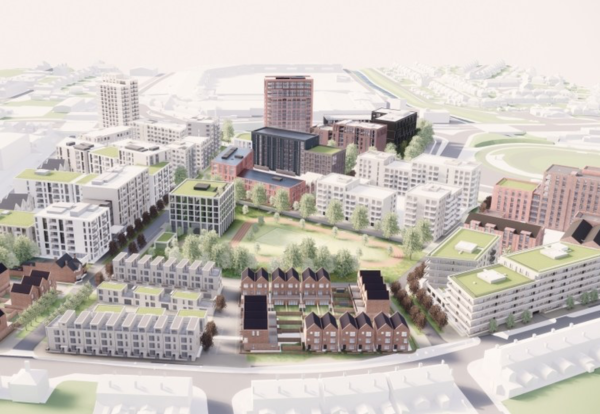 The Commonwealth Games athletes village, located on the site of the former Birmingham City University (BCU), will accommodate around 6,500 athletes and officials during the Commonwealth Games in 2022, before being used to provide 1,400 new homes for the area. Demolition of the former BCU buildings started in June and is due for completion shortly.

Proposals for the development, due to be considered by the council’s planning committee next month, include an Extra Care village for older people, retail and commercial space, and a new community centre.

Dan Labbad, CEO for Europe, Lendlease said: “The city of Birmingham has an exciting future that will further its global recognition and increase its influence on culture and industry across the UK.

“It’s great to be part of this growth and we look forward to working with Birmingham City Council to create a place that will positively benefit local people and visitors while creating more jobs, more homes and a legacy that surpasses this historic event.”

Councillor Ian Ward, Leader of Birmingham City Council, said: “It’s great to have Lendlease on board. They have an unmatched track record of delivering major projects like this on time and to the highest quality.

“I’m pleased to welcome them to the team and I have every confidence that they will work well with us to deliver a development that will be used for the Commonwealth Games Village that we can all be proud of in 2022 and beyond.”

Waheed Nazir, Birmingham City Council’s Corporate Director for Economy, added: “I’m delighted by the progress we have made in delivering this fantastic scheme which will transform the heart of Perry Barr.

“We have made great strides since the Commonwealth Games were awarded to Birmingham in December 2017. In less than a year we have assembled all the land we need for the residential component of the development, nearly completed the demolition of the BCU buildings, designed the new development, submitted a planning application, and now appointed a principal contractor.

“This really does show how the public sector can deliver major redevelopment schemes at scale and pace.”