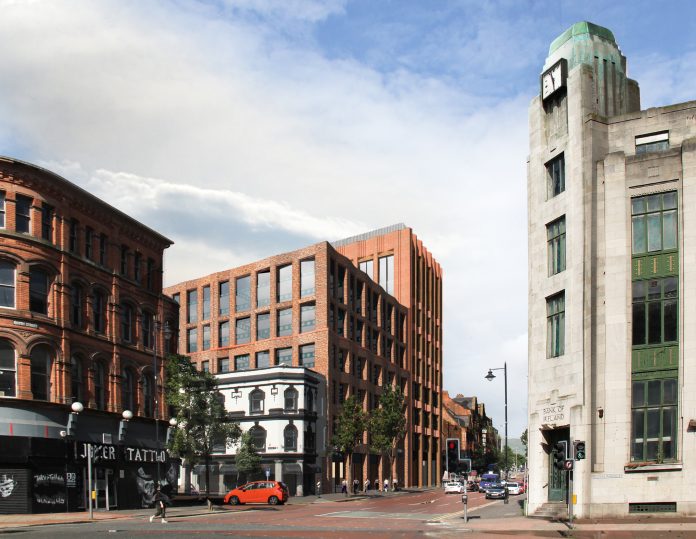 A multimillion-pound proposal has been unveiled that aims to revive an area of Belfast that has received little investment in recent years, with plans for new office space and units for independent businesses and retailers

Bywater Properties and Ashmour have launched the consultation on the mixed-use project under the consultation working title Building Blocks. The proposal covers a one and a quarter acre site between Gresham Street and Winetavern Street in the Smithfield area of the city, which is currently being used as a car park.

Outline proposals for the regeneration scheme include a vibrant mix of contemporary office spaces, co-working space and workshops for small, local businesses, as well as significant improvements to the current public realm. Central to the proposal is encouraging small independent businesses, retailers and makers to reinvigorate the streets.

The 235,000 sq ft scheme is anchored by a 115,000 sq ft main office building which will provide office space offering 21st century floorplates, exceptional design that is sensitive to the historic context, with roof terraces, digital connectivity and high-quality bike, shower and other amenities.

Theo Michell and Patrick O’Gorman from developers Bywater Properties and Ashley Stewart from local developer Ashmour emphasised that this is a long-term investment born of their confidence in Belfast’s future, which will also take inspiration from the area’s past.

“Smithfield was historically a thriving hub of trade in Belfast and our plans aim to make it a trading heart in the city once again. We respect the city’s heritage and culture and we want to preserve Smithfield’s character and the life that’s already there while investing to rejuvenate an area that has suffered from chronic under investment for many years,” said Stewart.

Michell added: “Smithfield has always been about small, local independent traders. We believe that it is important for the city to retain diversity, locating big businesses alongside small home-grown startups, independent traders and artisan makers. Our aim is to champion the independents, not to attract multi-national chains to fill standard shops. We believe larger businesses recognise these are the areas their staff want to work and socialise in, where there’s life and vitality on the doorstep.”

If approved, up to 650 construction jobs will be created in the build phase of the project and once completed the proposed office accommodation will have space for up to 1,500 people.