Like the timber frame market itself, Scotframe, an industry leader in the supply of full kit packages for housing and commercial projects in the UK, is undergoing a period of expansion and exciting new opportunities.

The Scottish-based company, which has just joined the global Saint-Gobain family, is planning further incursions into wider UK markets, as well as ramping up its training programmes to underpin its industry-leading offsite manufacturing capability.

Scotframe is a relative youngster in comparison to the French multi-national Saint-Gobain, which was founded in Paris in 1655. In contrast, Scotframe was established in Inverurie, in North East Scotland, just 28 years ago.

However, since then, it has transformed itself from a small local enterprise that made just 100 kits in its first year into a thriving concern dealing across sectors throughout Britain and abroad.

It has two manufacturing facilities in Inverurie and at Cumbernauld, just outside Glasgow, as well as sales offices and showrooms at Inverness and Dundee. It has 160 production and office staff and turned over £35m last year, equating to some 1,500 units.

On the residential side, it has a strong presence in the self-build market, as well as a trade sector supplying substantial developers such as Dandara, Cala and Tulloch Construction and also smaller, regional builders.

Its commercial arm provides full kit packages for hotels, schools, care homes and even a distillery as far afield as Orkney.

Up to 90% of kits supplied by Scotframe to the self-build market use its Val-U-Therm PLUS® closed panel system, a new type of building panel from which a house that is effectively zero carbon can be quickly and efficiently erected.

The Val-U-Therm PLUS® panels – precision-crafted from timber from sustainable sources and 100% fully filled with injected polyurethane insulation – can cut energy bills to virtually zero. They are maintenance-free and designed to last for 60 years.

The panels not only exceed all current building standards but also anticipate likely future regulations – allowing self-builders to futureproof their properties. Val-U-Therm PLUS® has a BRE Green Guide A/A+ Rating and can achieve Passivhaus standard.

It is this kind of innovative thinking, said Scotframe Sales Director Malcolm Thomson, that attracted the attention of Saint-Gobain, which has a strong presence in Scotland and helped build the new Forth Crossing.

“Scotframe’s alliance with Saint-Gobain will bring many benefits,” he said.

“It will help accelerate our expansion into markets south of the border, enhance our financial security and allow us to develop our people.

“We hope to develop self-build training schemes to help our customers develop their own skills and knowledge about the process of building their own home.

“The new relationship also gives us access to other Saint-Gobain companies operating in the UK, such as Jewson, which has more than 700 outlets, predominantly in our target market of England.”

The wind is fair for an expansion of offsite manufactured kits in England. According to the Structural Timber Association, the market share for timber construction in England has risen to 22.8% – below Wales at 30.7% but above Northern Ireland at 17.4%.

All three home countries are outshone by Scotland, which has traditionally led the way in timber frame construction. Its market share for timber construction has now reached 83%.

With housebuilding now near the top of the political agenda in the UK, the spotlight is increasingly focused on off site or pre-manufacture construction and the significant benefits it brings to large and small projects. 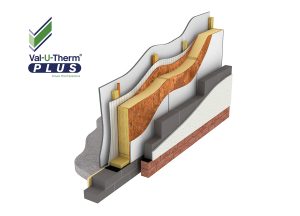 Safety. Construction in a factory is predictable and controlled.

Timescales. Closed panels are delivered to site in packs to suit the build sequence required. Pre-manufactured structures increase the speed of build and time to wind and water tightness, allowing quicker access for follow-on trades.

“Although the construction market as a whole can fluctuate, the share of that market which is being taken by timber frame is growing all the time.”

The only elements the builder has to deal with are bathrooms and kitchens, plumbing and electrics, external cladding, foundations and roof tiles.