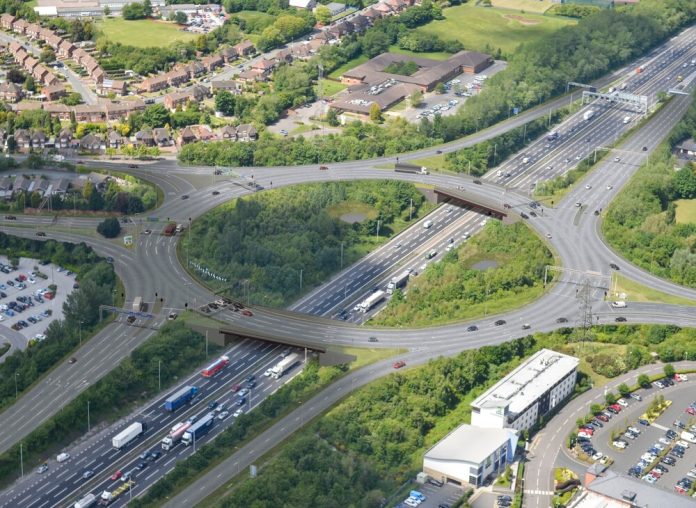 The new M6 junction at Walsall is a joint venture between Highways England and Walsall Council, supported by the Black Country Local Enterprise Partnership.

The current junction is over 50 years old and replacing the bridges which carry it over the motorway will avoid the need for extensive maintenance. The new bridges will also make the junction larger, significantly reducing delays for road users.

The new M6 junction will help facilitate growth at the Black Country Enterprise Zone in Darlaston and improve accessibility for cyclists and pedestrians.

Following a public inquiry in April, the Secretary of State has now confirmed the orders to acquire the land needed to alter the junction and layout of the local roads and motorway slip roads.

Only a small area of land is needed on a permanent basis as the scheme uses existing highway land where possible.

M6 junction 10 and the surrounding area currently experiences significant congestion and delays. The problems there were identified as one of the main transport issues facing the region in the West Midlands Strategic Transport Plan.

Highways England project manager David Reed, said: “We are delighted to announce that John Sisk & Son have been appointed to lead this important scheme which will tackle congestion at a very busy junction at the heart of the country.

“This is a significant milestone for the project which will ultimately bring smoother and safer journeys for the many thousands of drivers using junction 10 every day.”

Councillor Adrian Andrew, deputy leader of Walsall Council, said: “With junction 10 on our doorstep, Walsall has excellent connectivity and is an attractive place for investment. Reducing delays and increasing capacity at this vital interchange will play an important role in strengthening our economy and improving the accessibility of our town centre.”

Paul Brown, Managing Director UK Civils, John Sisk & Son, said: “Sisk is delighted to be awarded this major highways scheme. The project provides us with an opportunity to further enhance our reputation and continue our excellent relationship with Highways England, following the recent successful completion of the A19 works in the North East.”

Preparation work is expected to get underway in the autumn with construction work beginning in January. Work is due to be completed on the new M6 junction by summer 2022.