Business activity meanwhile declined for the fourth consecutive month and at a slightly steeper rate than in July. Commercial work was again the worst-performing area of activity in August, with survey respondents citing delayed decision-making among clients in response to domestic political uncertainty. At the same time, construction firms indicated that their business expectations for the year ahead weakened sharply since July and were the least upbeat since December 2008. 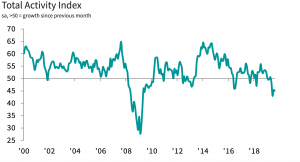 All three broad categories of construction work decreased in August, led by commercial building. Survey respondents continued to note that Brexit-related uncertainty had encouraged risk aversion and tighter budget setting among clients. Civil engineering activity also dropped at a relatively sharp pace during August. In contrast, house building fell only slightly and the rate of decline was the least marked since the downturn began in June.

New orders received by construction companies have dropped in each month since April. Latest data signalled a sharp decline in new work, with the rate of contraction the fastest since March 2009. Anecdotal evidence suggested that weak demand conditions had led to a lack of tender opportunities and strong competition for new work, particularly in the commercial sub-sector. Despite a sustained reduction in new orders, employment trends were relatively resilient during August.

The latest survey pointed to only a marginal drop in staffing levels, with the rate of decline the slowest since the downturn in payroll numbers began in April. Some construction companies noted that tight labour market conditions had encouraged the retention of skilled staff, with any cuts to payroll numbers achieved through the non-replacement of voluntary leavers. Input buying decreased for the fifth consecutive month in August, which represents the longest period of decline since the first half of 2013.

Concerns about the business outlook were overwhelmingly attributed to domestic political uncertainty and a corresponding drop in client spending.

Tim Moore, economics associate director at IHS Markit, said: “Domestic political uncertainty continued to hold back the UK construction sector in August, with survey respondents indicating that delays to spending decisions had contributed to the sharpest fall new work for over 10 years.

“Construction companies noted that rising risk aversion and tighter budget setting by clients in response to Brexit uncertainty had held back activity, particularly in the commercial sub-sector. Commercial construction activity fell at a steep and accelerated pace during August, which more than offset the softer rates of decline in house building and civil engineering work.

“Concerns about softening demand for new projects resulted in a fall in business optimism across the construction sector to its weakest since December 2008. This provides an early signal that UK construction companies are braced for a protracted slowdown as a lack of new work to replace completed contracts begins to bite over the next 12 months.”

Duncan Brock, director at the Chartered Institute of Procurement & Supply, added: “The sector fell deeper into contraction as continuing uncertainty and a weakened UK economy took a sizeable bite out of this month’s construction activity. Inevitably business confidence followed suit, dropping like a brick to its worst since December 2008 and close to the lowest depth seen in the previous recession.

“As Brexit creeps closer and confusion still reigns, this will undoubtedly heap more pressure on the UK Government to create much-needed clarity in the market. The commercial sector particularly has been devastated by reluctant clients fearful of taking a wrong turn in a confusing landscape and delaying project starts, resulting in the fastest drop in new orders since March 2009.

“In contrast, job creation remained fairly steady as companies strived to retain talent and the anxieties of further price rises for materials eased slightly which offers some respite for construction margins.

“The reality is, if a revival of confidence and a flood of new orders return to the construction sector in the coming weeks, much like a large tanker turning in a dock, there is little room for the sector to improve in the last quarter of the year. It’s likely September’s data will be even more discouraging.”