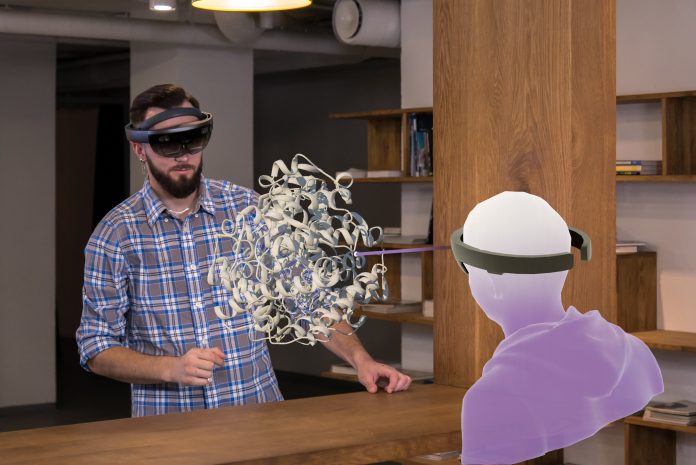 Virtual, augmented and mixed reality are gaining a foothold in construction as digital transformation progresses. Matthew Bumford of Kazendi looks at the emergence of this technology and how the HoloMeeting remote meeting tool can support the collaborative design so important to BIM

With the release of Microsoft’s HoloLens back in 2016, industry and enterprise clients were given an opportunity to explore a literal new dimension for creative work processes. Fast forward to today and the possibilities unleashed by immersive technologies and advanced augmented reality (or mixed reality as it is known) are being realised. For the building and construction industry, across all major verticals from initial design to ongoing building maintenance and repair, this has positive real-life implications that could disrupt the industry in a major and positive way.

Before we get too ahead of ourselves, we should first explore exactly what mixed reality is and how it can benefit the industry. There are a number of so-called immersive technologies in the market at the moment, including augmented reality and virtual Reality, which can lead to various degrees of confusion and crossover, as well as misunderstandings about how they can be used from a commercial perspective.

Augmented Reality: A type of virtual augmentation that is not informed by real-world data in anyway and instead uses geo place-setters or markers to allow data to ‘float’ against its real-world location. Seen mostly via smartphones or tablets, the tech has a variety of uses across both consumer and industry technologies. Perhaps the most famous example of augmented reality is the Pokemon Go app or Google’s now defunct smart glasses.

Virtual Reality: Using a virtual reality helmet or goggles, users become fully immersed into a virtual world where every facet has been rendered digitally. Currently, virtual headsets require the user to be tethered to a high-performance PC but the technology has proved useful for training purposes, especially within the industries and the gaming community.

Mixed Reality: This can be seen as a crossover between virtual and augmented reality where every virtual presence or hologram is informed by real-world positional data. Using transparent smart goggles or a helmet, the user sees holograms placed within their actual environment. As it is untethered, computing is done via the headset itself and so it can be used remotely. Mixed reality is best suited for commercial and industrial purposes. Today’s mixed reality push is being led by Microsoft and its HoloLens headset.

While there are clear industrial uses for both augmented reality and virtual reality, the technologies, and their relative hardware, have certain limitations which have certainly hindered their widespread commercial adoption. For augmented reality, it is the lack of real-world positioning and the physical screen limitations of mobiles and tablets. For virtual reality, it is the tethered nature of the headsets that hold it back.

That is not to be biased towards mixed reality, as there are clearly viable commercial and industrial uses for both AR and VR. However, when it comes to several industrial functions, such as remote support, design and collaborative elements – it is mixed reality leading the way.

The reason for this is because mixed reality is driven by one key, commercially focused player: Microsoft. Microsoft’s HoloLens headset is a powerful, inclusive computing system built on the Windows 10 infrastructure that can be incorporated with existing Windows programs and tools like Office, OneDrive and Skype and so comes with a well-established office suite for businesses to take advantage of.

Microsoft already saw the industrial potential of HoloLens from the outset and so engaged with market leaders such as Trimble, Volvo and ThyssenKrupp to test pilot programmes for the use of mixed reality in real workplace scenarios.

This gave it something of a head start in being able to trial various aspects of functionality directly in the market before putting its headset out to the world. The ROI therefore is already proven, not simply a possibility.

The potential of mixed reality is there to be seen.

Mixed Reality for design and collaboration

From a design and collaboration perspective, mixed reality is a technology that can help bridge gaps in current industrial processes, making them more efficient, dynamic and collaborative. Perhaps nowhere is this more true than with industrial design.

Our experience of being an early adopter of Microsoft HoloLens and one of the first studios in Europe to dedicate ourselves to mixed reality has enabled us to amass over 20 commercial projects since 2016. The insight garnered from this and direct client feedback, as well as our own internal process requirements, led us to create HoloMeeting.

We saw that industrial clients clearly wanted to innovate and implement new technologies and techniques (such as BIM for the construction industry) and yet various limitations have tended to hold back such implementation. Through the development of HoloMeeting, we aim to be able to support this desire and allow the industries to use mixed reality technology as a support tool for existing processes and increase the wider adoption of HoloLens for commercial usage.

The ACE industries of architecture, construction and engineering are a prime audience to benefit from HoloMeeting, both as a standalone application and to augment BIM practices.

Digital transformation in construction has been something of a long and painful process. With notoriously thin margins, often innovation has needed to take a step back in the face of simply ‘getting things done’. Even with BIM implementation, this requires all parties across the ecosystem to be on board with the same file types and, importantly, at the same location (not always feasible when international builds are concerned).

So BIM and the potential efficiencies it can bring to design and construction projects is often held back by outside influences.

With support for over 60 different file types, HoloMeeting becomes the ultimate industry leveller, with multiple assets able to be ported into the holographic workspace, including popular Building Information Modelling assets like Revit, as well as support for other 3D file types such as Solidworks, AutoCad, Open Cad, Rhino and more. That is in addition to supporting popular 2D file types such as PDF documents. This means that meetings can be held fluidly and effectively, without users needing to be in the same room and with all the information from both 2D and 3D assets available to move forward.

How does it work?

HoloMeeting is a remote collaboration tool using Microsoft HoloLens and has been designed to ease of use and efficiency in mind. It works just as well in the field as it does in office locations so can be used for both remote maintenance and on-the-job communication as much as it is a collaborative tool.

This is important because it immediately connects all players across the building and design ecosystem, from those laying out the initial sketches to those actively constructing the project. Such fluidity means impact and efficiency: an architect from the other side of the world can be in touch in an immersive 3D capacity and be on a construction site to act as a remote expert – reducing delays and increasing transparency across the whole building process.

At the design stage too, meetings no longer need to be arranged months in advance for international and dispersed teams as HoloMeeting brings people

together in the same ‘space’ instantly.

This workspace (as pictured) is the hub of HoloMeeting and allows for design, collaboration and communication to be as fluid and intuitive remotely as it would in an office scenario. HoloMeeting does not serve to replace these current practices but rather support them and make them more efficient and engaging. In that respect, collaborative work needn’t be so ‘stop-start’ as it can be currently but more malleable and therefore more immersive than ever before.

What does this mean for construction?

The HoloLens is a piece of technology that seems tailor-made for the construction sector and is set to solve many of the niggling issues of inefficiency that the industry suffers from. As such, it is set to become a key part in the wider field of digital transformation in construction. HoloMeeting acts as a bridge within this transformation, adding value across a range of verticals and with numerous use cases. It can be used just as effectively for board meetings as it can for design; just as well for the weekly sales call as it can assist field engineers with their repairs. We see it as a leveller and a tool to be used within the wider network, not to replace anything. Which is important to note as there is often a hesitancy among (especially older) industries to adopt new technology.

Where collaborative design is concerned, the application is already at a stage where it can be used on a daily basis to promote collaboration. Designers, constructors, architects and engineers do not need to ‘live’ inside the HoloLens but can simply jump into design meetings when needed and even pick up where they left off, just like closing the door and coming back a week later in the real world.

It’s exciting to see the application used, and championed, by those that live and breathe BIM every day and see it as a worthwhile addition to the digital construction toolbox.