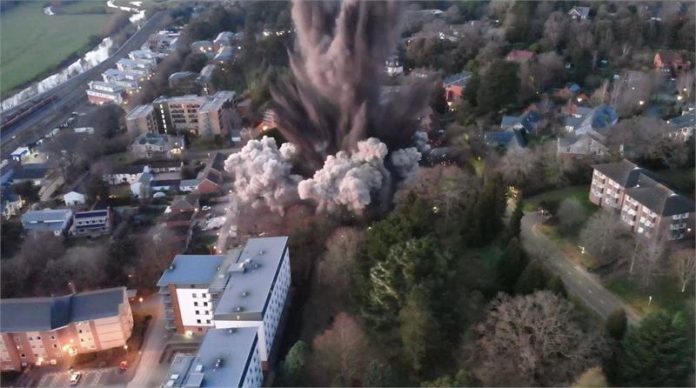 The detonation of the World War II bomb led to a huge blast that blew out the windows of local buildings around the student accommodation site.

UPDATE: WW2 bomb detonation, #Exeter – Residents outside of the 100-metre exclusion zone can return home as of 6pm this evening, Sunday 28 Februaryhttps://t.co/gBCDQeji2Y pic.twitter.com/jjrpSOYIeh

Residents were evacuated from their homes in Exeter while the detonation of the bomb took place.

A crane has been used to remove large pieces of metal from nearby roofs.

Fencing has been erected around the 100-metre exclusion zone which includes Glenthorne Road – where the bomb was located – Cowley View, Jefford House and Charleston House.

Devon and Cornwall Police, said: “Around 400 tonnes of sand was transported to the site of the device, which is at a building site on private land, and walls were erected, initially by the Royal Navy bomb disposal experts, followed by army personnel from the Royal Logistics Corps, to mitigate the impact of the detonation. Trenches were also dug to prevent ground shock.

“Despite these mitigation measures, the impact of the blast has been significant and debris has been thrown at least 250 metres away. The crater is around the size of a double decker bus.”

Exeter University is communicating directly with its 1,400 halls of residence students who have been evacuated.

The operation pre and post-detonation involved dozens of volunteers including; Dartmoor Search and Rescue, the Coastguard, Devon & Cornwall 4×4 Response and others.