A new survey suggests 2017 saw a strong start to the first quarter, despite construction costs continuing to rise

The Construction Products Association has revealed an optimistic outlook for the year ahead as 2017 kicked-off on a positive note. However, the organisation warned rising construction costs still remain an issue.

The Trade Survey Q1 reported builders, civil engineering firms, product manufacturers and specialist contractors saw a strong start to the year, with sales and workloads growing. However, main building contractors saw a decrease in activity due to a slowdown in the industrial and commercial sectors. Some 31 per cent of respondents reported that during Q1 2017 construction output fell when compared to a year earlier. Furthermore, both main and civil engineering contractors found their order books were lower across the majority of sectors.

Positive start to the year

Rebecca Larkin, Senior Economist at the CPA commented on the survey, stating: “Q1 was a positive opener to 2017 for product manufacturers, specialist building contractors and SME builders, continuing the momentum built up over the last four years of growth.

“For main contractors, however, it was only private sector house building that provided the bright spots of activity during the quarter. Falling orders in the commercial and industrial sectors also spilled over into infrastructure in Q1 and signal a broader weakness ahead.

“Furthermore, in contrast to the continued rise in costs reported during the quarter, particularly for imported raw materials, building contractors’ tender prices are moving in the opposite direction. This suggests that it is margins, rather than clients, that are bearing the brunt of cost inflation.”

Construction costs have been steadily rising over the last year or so, with contractors feeling the pinch following the value of the pound declining. Some 84 per cent of civil engineering contractors, 86 per cent of main contractors, and 93 per cent of heavy and light side manufacturers reported raw materials costs rose.

Suzannah Nichol, chief executive of Build UK, said: “Despite mixed rates of output growth in the first quarter of 2017, it is good news that enquiries for future work grew strongly with confidence in the project pipeline for 2017.

“But increased costs are beginning to bite. The majority of the supply chain reported increased costs in Q1, especially for materials. If this level of price increase continues, current and future projects could start to feel the squeeze.”

Could the sector be at risk of stagnation?

“They show that not only is the rate of growth in infrastructure workloads currently sluggish, but that order books have moved into the red, indicating that the sector is at real risk of stagnation,” she said.

“Unless action is taken, our sector runs the risk of falling into a recession at exactly the time that we need it to be driving growth in the economy.

“As the country prepares to go to the polls next month, we call on all parties to commit to the projects outlined in the National Infrastructure Delivery Plan, and ensure steps are taken to boost investment in all regions of England, Scotland and Wales. Failure to act could undermine the sector’s ability to deliver.

“This will imperil the British economy at the very time we need this key driver of economic growth to secure the future of the UK.” 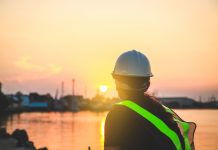