Home Building Control News The use of admixtures to waterproof concrete: Waterproofing with other building elements 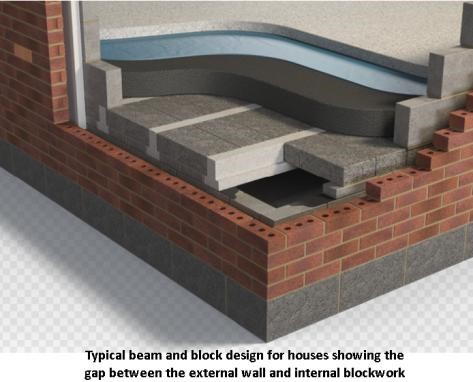 During 2018, my articles concentrated on the actual admixture side of waterproofing concrete. Regardless of how effective an admixture is, however, it is not a panacea for poor concrete practice.

This article will look at a few common issues that give rise to leaks in basements that are initially blamed on the concrete but which actually have nothing to do with it and hence hints to designers and contractors of things they need to pay extra special attention to in order to complete the basement waterproofing.

For ease of access, many buildings have level access from the street into the building, which requires a waterproofing design to prevent water flooding into the structure. This is especially important in areas prone to flooding. The same scenario applies to lightwells where there is access into the lightwell at basement level.

In the past, designs incorporated steps up to the entrance and around the building to act as a flood defence. This design is still used today, of course, but adapted to incorporate an inclined pathway for use by wheelchairs.

However, there have been a few high-profile cases where the waterproofing for buildings with street level access has been breached, with severe damage caused to valuables stored in the basement.

In lightwells, it is common to see Aco-type drains placed in the lightwell along the entrance into the building. What is surprising is that often the smallest of these drains is used, which means they are inadequate, and made worse with a few leaves and rubbish entering the lightwell, such that water easily runs straight across the drain. If there is a step up into the building, this may not be a problem but, if not, a robust waterproofing detail is needed to avoid this common issue.

Following on from this, the same inadequate drainage is often seen at the base of car park ramps, such that water rushes down the ramp, across the drain and into the basement.

The answer, of course, is simple: place the reinforced slab to falls and do away with the screed or, if it is absolutely necessary to have a screed, use a decent sized drain. After all, the extra cost is minimal.

Staying on this theme, it is very common to build houses with basements using the beam and block principle. The basement is constructed with a reinforced concrete slab and walls with insulation applied against the walls and a blockwork wall built in front of the insulation. The house above is then built off the beam and block floor, leaving a waterproofing headache due to the gap between the reinforced concrete walls and the outline of the house.

The waterproofing here is usually specified as a membrane attached to the external side of the reinforced concrete wall and having to jump across the insulation and up to DPC level. This is a frequent source of water ingress into basements as the membrane is often not properly installed, especially where it goes around corners, and is easily damaged.

Where there is a defect, rainwater simply seeps its way down the insulation, causing visible dampness in the blockwork and often pooling of water on the basement slab.

As noted in one of the previous articles, BS8102:2009, the code of practice for protection of below ground structures against water from the ground, recommends the consideration of two forms of waterproofing in more critical cases. In this particular top of RC (reinforced concrete) wall scenario, there is usually only one form of waterproofing regardless of how critical it is, and it really is a common problem.

The question is why is this such a common design? Why not put the insulation on the external side of the reinforced concrete wall, build the house off this wall and do away with the blockwork? This would give the occupier a bigger basement, at a lower cost, while removing this waterproofing conundrum. 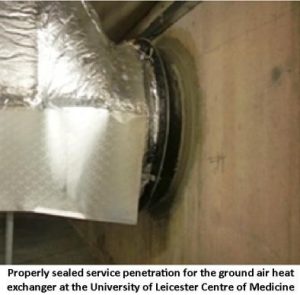 A not infrequent failing in the British construction industry is that main contractors do not always appreciate that it is their responsibility to supervise the work of their subcontractors. As a result, many things happen that are totally unacceptable.

An actual example will demonstrate this. A subcontractor was building a block wall in front of a reinforced concrete basement retaining wall. Near the bottom of this wall, three holes had been cored through the wall for service penetrations – but they were in the wrong place. Water was flowing through these holes but the subcontractor completely ignored this and just kept putting up the blockwork.

This was brought to the attention of the main contractor, whose response was that the project was already behind so they needed to get the wall built as they could always remove some of the blocks to seal these holes later if need be. It would not have taken more than an hour to have sealed these holes with free access available. Needless to say, this water ingress was subsequently a major issue and gaining access after fitting out was both expensive and difficult.

The moral of that story is: Do not cover up or try and hide defects!

Finally, a brief word about swimming pools constructed using reinforced concrete, especially suspended pools as opposed to in-ground pools. Before tiling or painting, pools are often filled to check there are no leaks. If we take a small pool of, say, 15m long by 7m wide, such a pool will hold around 200 tonnes of water. On filling the pool, minor expansion of the structure will take place to take up the pressure exerted. In most cases, everything will look fine with no leaks, so the pool is emptied and fitted out before refilling.

However, in emptying the pool, the structure will ‘relax’ and on refilling visible cracking may become apparent with possible leakage. To reduce the risk of cracking, follow the advice given in BS5385.

With suspended pools, it is also very important that the design isolates the pool from the rest of the building to avoid the stresses and strains of the building causing cracks in the pool.

All buildings have their unique features and are made up of thousands of different parts so there are bound to be issues that need remedial work. Unlike a new car that has a fault and is simply returned to the garage for repair, a house or building is where people live or work and, as a result, problems become very emotive and made worse by the perception that as it is new, it must be perfect.

However, many developers have an over-optimistic view as to the time needed to complete a building and this leads to the ‘rush rush’ syndrome, which then leads to contractors taking shortcuts and not acting with due care and attention to detail. This is highlighted in many building contracts where rigid penalties for late completion apply.

Crossrail is a good example of failed expectations. This is a huge project, built over several years and technically demanding with numerous unknowns.

How anyone came up with a definite completion date is worrying. In reality, there should have been optimistic, best guess and worst case completion dates. That way, the project would have been properly budgeted and funded without all the blame culture that has now taken place, tarnishing what will be one of our greatest 21st century projects.