Maria da Graça Prado, senior policy and research adviser at CoST, the Infrastructure Transparency Initiative discusses assurance work around the world to demonstrate the value of transparency and open data as a catalyst for change in the management and delivery of public infrastructure

In over a decade, open data went from revolution to a mainstream approach in government. Backed by access to information laws, the movement marked a critical change in the attitude of public officials in recognising that the data they collect is a public asset and that information “becomes more valuable as it is shared” (Open Government Data Principles, 2007).

Evidence of the benefits of open data are numerous and related to different areas of government, from public contracting to fiscal matters and environmental impact. However, despite the progress, turning open data into information that is coherent and meaningful remains a challenge.

CoST – the Infrastructure Transparency Initiative – is a global effort to improve transparency and accountability in public infrastructure. Launched in 2008, CoST works with governments, industry and civil society to promote disclosure, validation and use of data from infrastructure projects so that all stakeholders are informed of what is happening in projects.

One of the core features of CoST is assurance, which consists of an in-depth review of a sample of infrastructure projects by a team of independent experts. Under the CoST approach, assurance is a tool that assists stakeholders to understand the disclosed data and make the best use of it.

In 2019, assurance teams in nine countries – Afghanistan, Costa Rica, El Salvador, Ethiopia, Guatemala, Honduras, Malawi, Thailand and Ukraine – published their reports, with a total of 100 projects reviewed worth over $4bn in public investment. Most of the procuring entities were federal entities (66%), followed by municipal and local authorities (26%).

The infrastructure projects included roads, airports, ports, water systems, education and sports centres, health facilities and urban development projects. Road projects accounted for 41% of the total. At the time of assurance, 44% of the projects were concluded, 50% were ongoing and 5% have been suspended due to contractors’ financial issues.

It is a small sample of projects that does not have the intention or purpose to generalise findings. There is value, however, in presenting these findings to offer insights to practitioners and policymakers on how transparency and open data can impact sector practices and processes.

In 2019, disclosure rates showed a positive trend in the CoST countries. Even in projects where initial proactive disclosure was low, reactive disclosure contributed to elevate the global transparency level. Eurasia countries recorded the highest rates of disclosure, with Thailand and Ukraine as the top performers. On the other hand, the African region continues to show substantial transparency gaps, with little information available to assess the competitiveness of bidding processes. 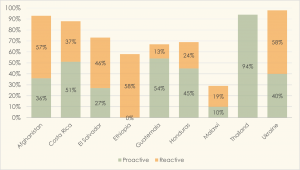 Previous assurance findings have indicated that issues of project preparation are the most common matters to disrupt project implementation. The 2019 cycle of assurance confirmed the same pattern as failures during planning stages, ranging from incomplete and outdated designs to absent feasibility studies and lack of appropriate financial forecasting continued to lead as common concerning issues in project delivery.

A key finding revealed in 2019 relates to health and safety on construction sites. In the aggregate analysis, which includes complete, ongoing and suspended projects, health and safety represented 11% of the issues commonly raised by assurance teams. But focusing on ongoing projects where site visits were carried out during assurance, a more concerning situation emerged as one-third of the projects recorded health and safety failings.

This included cases of construction workers with no protective equipment and situations where local communities had been exposed to unsafe conditions, such as lack of appropriate project signage or no external lighting during construction.

These findings confirm the perception amongst practitioners in the sector that the outbreak of the Covid-19 pandemic struck in a moment where health and safety were already a concern in infrastructure development.

Another finding from assurance relates to the environmental conditions of projects. The 2019 cycle revealed a common fragility across CoST members: environmental impact assessments were only disclosed in 43% of the projects assessed.

Further research is required to clarify whether the lack of disclosure means that procuring authorities failed to produce the appropriate environmental assessments and, if that was the case, how projects were able to start despite the lack of environmental clearances. 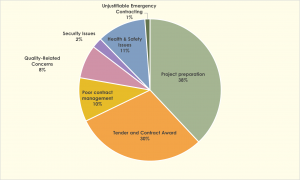 From the analysis, it was possible to identify cases of positive change in project management and delivery practices. One example comes from Ukraine, where design issues identified by the data disclosed in assurance prompted Kiev’s municipal authority to create a new public division to oversee the preparation of project designs and to conduct a more robust verification of project documentation, including in relation to environmental issues.

Afghanistan is another example. The data disclosed on the low number of bidders qualifying in capital-intensive projects encouraged the National Procurement Authority to re-evaluate the legal criteria of qualification, allowing a degree of flexibility to amplify the available pool of local bidders able to compete.

In Ethiopia, data brought to light in assurance demonstrated that procuring entities were not applying mechanisms to monitor project activities. Even simple tools to compare baseline planning and actual progress were not used, often leading to numerous situations where procuring entities missed opportunities to claim contractual damages against contractors. The findings were used by civil society in parliamentary discussions and help to build consensus around the need of strengthening regular monitoring of project progress.

With the Covid-19 pandemic, the digitalisation of construction has been fast-tracked, with more professionals relying on digital collaboration tools such as building information modelling (BIM) and similar systems.

Increased digitalisation of the industry can push transparency and open data to a next level where openness of information and data analytics are embedded, from the beginning, in the processes of delivering public infrastructure, making projects “open by design” and systems and proceedings open-data ready.

Closing data gaps in infrastructure is paramount not only to improve efficiency and reduce project shortcomings, but also to close the substantial global infrastructure gap and help build back better.