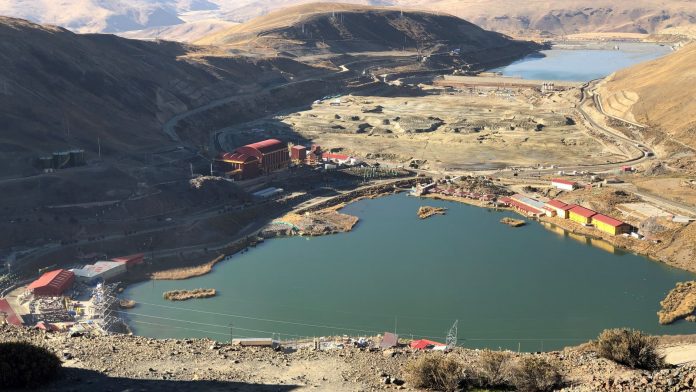 San Rafael is the main tin-producing mine in South America and the fourth largest in the world. It is located in the eastern Andes, producing about 10% of the world’s tin.

The site has maintained a high standard of sustainability and environmental responsibility for many years, including with its tailings management.

The company planned to build a new greenfield tailings reprocessing plant, known as the B2 project. The process of managing a significant quantity of tailings requires a complex configuration. It included many different processing spaces, mechanical and electrical systems and extensive pipework, requiring the engagement of a wide variety of disciplines and specialist engineers.

The company felt that the development of this physically complicated project and its many subsystems would be better understood if construction progress could be fully visualised at every stage, with information easily exchanged between the owner Minsur and its main contractor.

Although the original feasibility programming for the B2 project at San Rafael had been created in Primavera P6, and this remained the tool of choice for the main contractor, it would not easily enable Minsur to maintain a continuous as-built 4D visualisation.

The company set out to bridge that gap. It chose Elecosoft’s Powerproject, not only because of its interoperability and ease of data exchange with Primavera, which would be used as the programme platform throughout construction by Cosapi, the main construction contractor, but also because Minsur could easily take progressed information and visualise it in a 4D BIM programme, via the Powerproject BIM module.

The first step taken was to convert all the original 3D modelling for the plant into full IFC (Industry Foundation Class) files, regarded as the base interoperability standard for BIM data. The second essential step was to convert the original baseline schedules from Primavera P6’s .XER format into Powerproject files.

Carlos Peñaloza, senior lead planner at the B2 project, said: “The conversion process was effortless and fast. Converting the thirteen hundred tasks in the construction contractor schedule from P6 into Powerproject took only seconds.

“We reviewed the dates and links to ensure the data had converted correctly, and all of them matched perfectly.”

The final foundation step was to create an easily repeatable and time-efficient process to update the 4D schedule with the weekly progress updates from Primavera – because inputting this information manually would have been effectively impossible.

Jose Luis Hurtado, project controls manager at the B2 project, said: “We could not force our contractors to use our chosen tool, Powerproject, but we knew that updating progress manually would take too much precious time for our team.”

Reducing the demands of reporting

To enable the weekly reporting, APP Consultoría recommended using a Powerproject add-on from Elecosoft that could automate the updates from the .XER file directly into Powerproject files.

Peñaloza explained: “We just had to let the macro work – then it only takes 60 seconds each week to update the entire schedule.”

This meant that each week the 4D schedule could be rapidly updated to produced 4D BIM reports in various formats.

Using Powerproject BIM and another Elecosoft tool, O2C, the team was also able to generate flipbooks to show weekly progress, videos comparing actual progress with the original baseline and 3D files so that managers could see progress in an interactive format.

O2C is a compression tool that enables you to present 3D objects animated at high speed in a compacted format that can easily be embedded in presentations and reports. Although Minsur’s business technology was able to handle the processing demands of 3D modelling, the same could not be assumed for all parties.

These functionalities, together with the 4D scheduling data, enabled the project team to show progress not just weekly to the management team but also monthly to senior executives. The rich 3D visualisation, animations and detail about progress that these reports now contain has shifted expectations and become a new standard for reporting quality that the team expect to be required on future projects.

The project team leaders were satisfied with their selection of tools. Hurtado concluded: “Among several 4D solutions in the market, we chose Powerproject because of the sheer simplicity of connecting the main schedule with the 3D models. We are sure we will replicate this on forthcoming projects.”

Peñaloza concurred: “Using BIM and adopting digital technology is essential for any forward-thinking organisation in this market.

“However, as the owners, Minsur doesn’t have the time or resources to generate 4D schedules as the main construction programming, but with Powerproject we found a perfect complement which was easy to use and highly effective.”

Minsur SA is a Peruvian mining company that has been operating in the region for more than 35 years. It extracts and refines tin and copper, and engages in exploration for gold, silver, lead and zinc ores.

Construction of its new tailings processing plant at San Rafael was so complex that it wanted full progress visualisation in 3D throughout. With the aid of Elecosoft Premier Partner APP Consultoría de Gestión de Proyectos and regional Elecosoft Approved Partner Metacontrol Ingenieros SAC, it turned to Powerproject BIM to complement its existing approach, ensure interoperability and generate informative visualisation of the as-built status throughout the project.