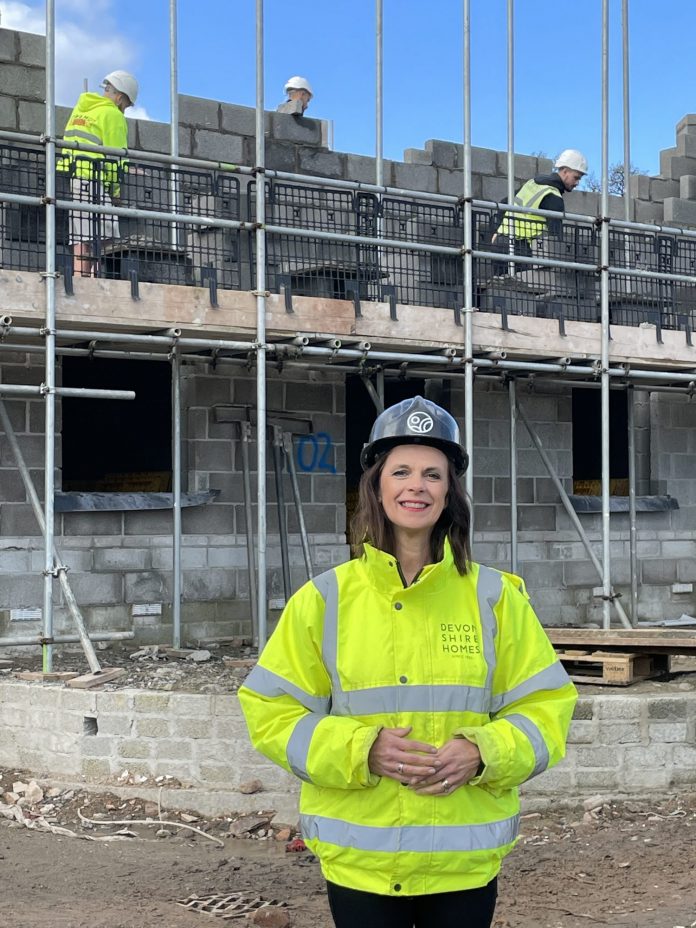 Construction now, more than ever, is looking to bring new entrants into the industry. As a male-dominated sector, Jane Pearce, sales and marketing director at Devonshire Homes tells PBC Today her experience, and how to tackle the gender disparity in construction

It’s no secret that housing and construction is a male-dominated industry. In fact, despite women comprising over 50% of the UK population, only 11% make up the construction workforce. When looking at the workforce of a new build homes developer, women will often predominantly occupy sales or marketing roles with jobs such as Site Managers and Construction Directors occupied by males.

Jane Pearce, sales and marketing director at Devonshire Homes, has experienced this first-hand but her drive and ambition has earnt her a place on the West Country house builder’s Board of Directors, the only woman on the Board. With over 25 years in the industry, Jane was selected along with a fellow Director to lead Devonshire Homes through a 20-month long period of change in 2020 whilst the housebuilder restructured its senior team.

How did Jane get to the position she enjoys today?

“My route to success has been through work experience and not the academic route which is now perceived to be the norm” said Jane. If I’m being completely honest, it’s an industry that I fell into rather than seeking it out but once I started working with new build homes, I got the bug. The more I got involved, the more I learnt and the more I wanted to take on.”

Jane began her career in 1998 by joining a local North Devon housing company, JW Sharman Limited, and worked her way up the ranks. “In 2003, it was acquired by David Mclean Homes and I continued to work for them as a Sales Manager and then Sales Director” said Jane. “In 2008, the credit crunch hit and the Taunton office which I worked from closed and that is when I joined Devonshire Homes as a Sales Manager. Since then, I have worked hard and became Sales and Marketing Director and Board member in 2015.”

Devonshire Homes is a multi award-winning West Country house builder based in Tiverton, specialising in creating high quality homes across the South West since 1992. Its Board comprises eight Directors with Jane as the only female.

“I’ve had a really positive experience working at Devonshire Homes as a woman and enjoy my role in the boardroom despite being the only female Director” said Jane. “To be taken seriously, you definitely do need to feel confident in what you are presenting and stand by your views. Having been in the industry for over 25 years now, my level of confidence is pretty robust and that has helped me become an active member of the Board.”

Confidence is something Jane feels women in the industry need to nurture to help them progress.

“Working in a male dominated industry, I have learnt that it is imperative you stand up for yourself” said Jane. “I do recognise that I am quite lucky as all of the companies that I have worked for have been very accepting of women. Although it is hard not to notice the gender imbalance, throughout my career, I have never felt that being a woman has been a barrier.  Certainly, you are very aware that you work in a male dominated industry, but in my experience confidence and a strong, positive attitude have been fundamental in my own progression.”

Confidence isn’t just the secret to Jane’s success. Knowledge has played an important role too.

Demonstrating knowledge in the sector

“Not only do you have to be confident in everything that you do but using and demonstrating the knowledge you have is important too. Whilst my area of expertise is in sales and marketing, it is important to show that I have an understanding of methods of construction and the industry as a whole. If you’re knowledgeable in the field that you are working in, then I’ve found that helps breakdown any pre-conceived perceptions there may be about women in construction.”

It seems that the number of women entering the construction industry is slowly improving. According to Ranstead, women in construction management roles increased by 9% in the UK between 2018 and 2020. Jane agrees that she has witnessed small improvements but there are still significant gaps.

“I work in the sales sector which does see a higher percentage of women compared to the on-site and commercial jobs. If you look at the wider picture, there are more women entering the industry but site management, technical and commercial roles still have a lack of women.

“This needs to improve and we need to encourage more women into those areas. Young girls need to see role models that look like them to be inspired and visualise themselves in the industry. Whilst we currently don’t have many women in manual, technical or on-site roles, I think it’s important that a female sits at Board level and brings another perspective. Having a more diverse staff brings benefits to our company – broader ideas, fresh approaches and different strategies.”

How should the industry be encouraging women into the sector?

“The industry as a whole could certainly do more. Great steps have been made, but there is more that can be done to encourage women into the industry. It is the little changes which can have a bigger effect on making the industry more inclusive. For example, separate toilet and changing facilities for those working on site. When I first started, these were not available but are now on all developments. It’s little steps like that which have been made to remove the unintentional practices that were barriers for women, but there is definitely more that can be done.”

As for advice Jane would give other women thinking about a career in the industry, she encourages women to have their eyes wide open to just how many opportunities there are.

“Don’t be put off by the current gender imbalance in the construction industry” said Jane. “You may feel like you are in the minority but that doesn’t mean that you’re not an important cog in the wheel. Have the confidence and go for it. It’s an industry that offers so many different paths so you are bound to find something that interests you which will allow you to carve out a really worthwhile, rewarding career.”