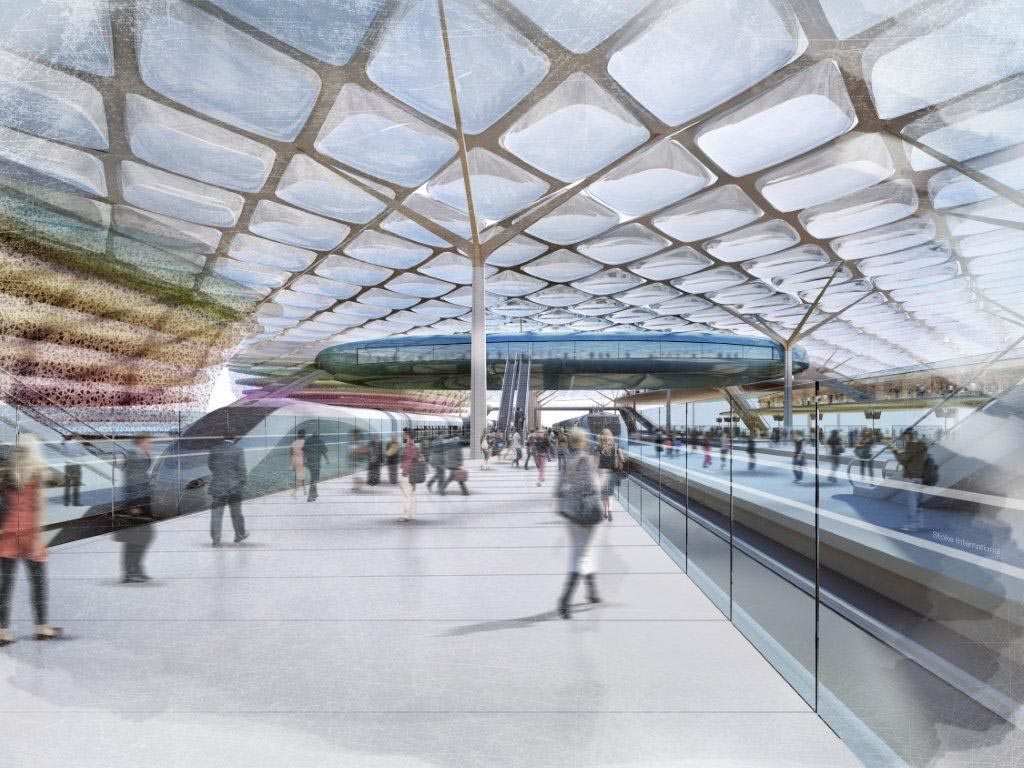 Local government leaders in Stoke-on-Trent say that the transformational growth potential of the city’s HS2 proposals will play a major role in filling the growing economic divide between north and south.

The innovative vision for a high speed rail station in the city has the potential to not only double the size of Stoke-on-Trent’s economy, but that the enhanced connectivity it will offer would supercharge economic prosperity across the wider region by linking the city to core economic powerhouses in Manchester, Birmingham and Liverpool.

The full city council has approved the submission of a response to the government’s consultation, which argues that the HS2 route should serve the largest urban economy and population between Birmingham and Manchester, and not bypass it by following an alignment which is also more expensive to build.

The council’s proposed route would use an upgraded West Coast Main Line route from Stone to Manchester, which would save up to £5bn from the government’s estimated £50bn costs, enable high speed trains to run to Manchester up to seven years sooner than currently planned and minimise the environmental damage associated with building the line.

The economic uplift resulting from having an HS2 station in Stoke-on-Trent has the potential to exceed the challenge laid down by the HS2 Taskforce and assist government efforts to rebalance England’s economy and counter the growing economic dominance of London and the South East.

The issue of the worsening economic imbalance was highlighted in a recent report by influential regional policy think tank Centre for Cities. The Cities Outlook 2014 report highlighted the disparity between northern regions and the South East, and underscored the need for more to be done to help northern economies to expand.

The report warned that, although the economy as a whole is growing, London accounts for 80 per of new jobs being created and is creating them 10 times more rapidly than the next fastest growing city, Edinburgh, while England’s northern regions lag even further behind.

Stoke-on-Trent City Council leader Mohammed Pervez said that the report underlined the need for cities outside London to do extraordinary things to spur local and regional growth, and to assert greater control over their economic destinies. He said:

“The central challenge laid down by the HS2 Taskforce is to use the enhanced connectivity which high speed rail offers to help rebalance the economy by dramatically shortening the distance between suppliers and regional, national and international markets.

“We know that our proposal will do that, but it will also go much further. Creating an international high speed rail station in Stoke-on-Trent is an important step in terms of national economic rebalancing because of our city’s strategic position and its vast potential for expansion.

“The Centre for Cities report makes it clear that high speed rail on its own will not be enough to enable the Midlands and the North to compete on equal terms with London for the fruits of economic recovery.

“However, I believe that our proposals for an international high speed rail interchange connecting us to Birmingham, Manchester and Liverpool will put Stoke-on-Trent at the centre of a powerful economic super-region which can begin to counter London’s inexorable pull on resources, jobs and talent.”

He added: “We are determined to put Stoke-on-Trent at the heart of a rebalanced UK economy. Our vision for a high speed rail line into the city, with an international station here in Stoke-on-Trent, is truly game-changing.

“HS2 needs to serve the regional economies, not bypass them. The improved regional, national and international connectivity will supercharge economic growth in our city and the wider region.

“The resulting inward investment and expansion will enable Stoke-on-Trent to capitalise on the growing momentum of innovation and improvement to claim our rightful place as an independent, forward-looking and prosperous city.”

Cities Outlook author and Centre for Cities senior economist Paul Swinney said that improved connectivity will be vital to enabling cities like Stoke-on-Trent to grow and work collaboratively to challenge London’s dominance. He said:

“Successful city centres attract knowledge-intensive services and businesses, such as those in software design, law and finance, because these businesses benefit from the proximity to clients, competitors and collaborators that a city centre can provide.

“Globalisation means that the UK economy is increasingly likely to specialise in these industries. This means that city centre economies are likely to become ever more important to the success of the national economy.

“For this reason public investment should aim to improve the ability of city centres like Stoke-on-Trent’s to attract businesses and to grow. This investment should focus not only on buildings, but also on transport connections, digital infrastructure, and the skills of the local workforce.”

He added: “The building of any new rail stations to serve a city, therefore, should ideally be located within, or as close as is practicably possible, to city centres. Improving the connectivity of our city centres is an important element of making them good locations to do business.”