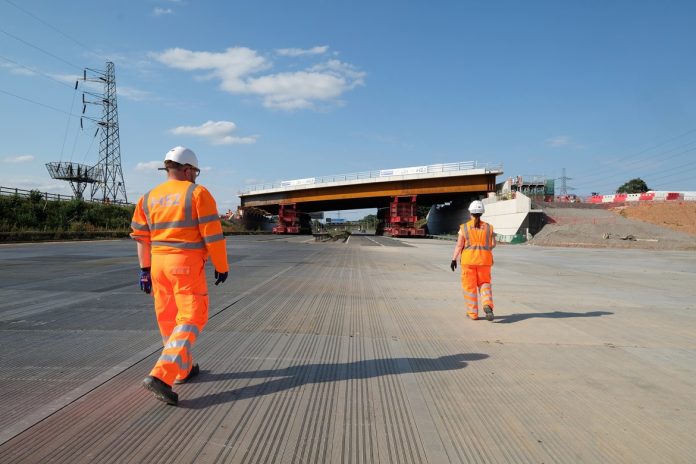 Work to install a 65-metre modular bridge over the M42 has been completed in just two days by and HS2 enabling works contractor, LMJV (Laing O’Rourke and J. Murphy & Sons Joint Venture)

The 2,750-tonne modular bridge structure was carried along the motorway on a self-propelled modular transporter.

The 448-wheel transporter took just one hour and 45 minutes to move the bridge span 150-metres, where it was affixed to a composite concrete deck to complete the overall bridge structure.

Traditional construction methods would have required several weeks of lane closures on both carriageways, followed by weekend and overnight closures.

Mark Thurston, HS2 Ltd’s CEO said: “This new road bridge is the first permanent structure to be installed along the route of Britain’s new railway.

“Today represents an important milestone for the project and the West Midlands region – which is already benefiting from thousands of jobs and renewed investment as a result of HS2.

“Constructing the bridge offsite and using innovative engineering practices to install it over the motorway enabled us to carry out the work in just two days, keeping disruption to a minimum for road users.”

The successful installation marks the completion of the first of four bridges to be built close to the new Interchange Station.

It will form part of the major remodelling of the regional road network to improve the circulation of traffic around the HS2 railway line and connect the existing road network to the new Interchange Station.

Andy Street, Mayor of the West Midlands, commented: “Seeing major construction activity like this in Solihull is hugely encouraging as it shows HS2 is now truly underway.

“In just a few years, the HS2 station at Interchange and further investments in public transport will help make Solihull one of the best-connected places in the UK.

“Today’s work also comes at a critical time for the West Midlands, as we look to bounce back economically from the coronavirus crisis.

“Major infrastructure projects like HS2 have a critical role to play as they help stimulate demand and create and secure local jobs for local people.”

Andrew Stephenson MP, HS2 Minister, said: “The installation of this innovative bridge across the M42, ahead of schedule and with minimum disruption, demonstrates our dedication to delivering this vital rail connection to the West Midlands as efficiently and as quickly as possible.

“It’s an achievement of British construction and marks another step forward in this historic project, which will leave a legacy of better connections and regional growth for generations to come.”

“Major components of the bridge and its supports were built offsite under safe, high quality conditions, then transported to site for assembly.

“Advanced digital capabilities allowed us to design all elements of the structure in a virtual world, before building it for real, and I am delighted that the work was completed safely and ahead of schedule.”

Further work in preparation for the arrival of HS2 is scheduled to take place later this year.

A similar bridge placement will be installed over the A446, ahead of two more bridge structures being installed which will span the new high-speed railway line.