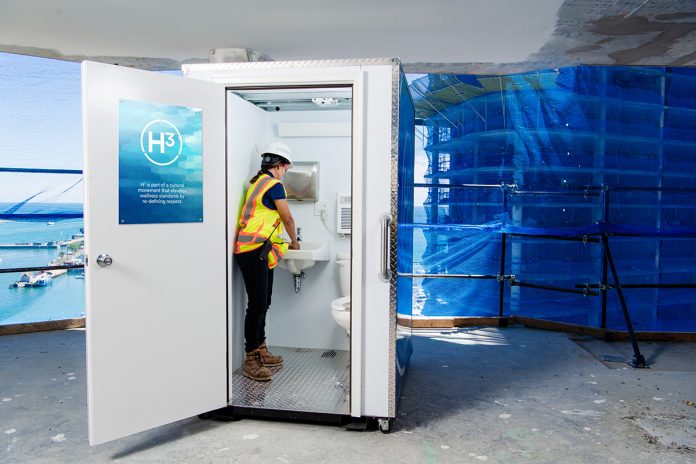 If you’ve ever used a porta-john, you know they’re unpleasant. For most people, they’re the last resort when on a road trip or at an event. But for many construction workers, they’re a feature of daily life, especially in high-rise construction.

Because some porta-johns have urinals on the outside, and doors that are open at the top and bottom, bathrooms for female workers are typically on lower floors for additional privacy. This means women have to use the hoist to visit the bathroom. Spending time going up and down floors is irritating for workers and not a productive use of their time.

“One of our core values at Lendlease is innovation, and we wanted to improve wellness for our high-rise workers,” says Glenn Clarke, the senior cost planner at Lendlease.

So a group of Lendlease employees threw around some ideas — resulting in the concept of the H3 wellness pods.

Clarke and his team came up with the concept before the current global pandemic hit. But now of course, proper hygiene is even more important. The H3 pods are more convenient and pleasant for workers to use — so frequent handwashing is not a chore!

After developing the idea, Clarke’s team built a prototype and got leadership buy-in. The next task was to find a manufacturer.

“We needed a manufacturer who could accommodate our requirements and the product specifications,” says Clarke.

Lendlease’s strategic sourcing manager, Terri Brown, adds that Lendlease selected B&T because, in addition to having the necessary manufacturing ability, they are also able to make rapid adjustments.

“Many pod manufacturers are willing to make however many hundreds of pods you need, but if you want a minor change, their process isn’t set up to do that,” Brown says.

“B&T’s speciality is making those changes on the fly. I’m not sure there’s any other manufacturer out there who can do that.”

B&T Manufacturing founder Tim Torpey explains that B&T is able to do rapid framing because they have three different FRAMECAD machines in their facility.

“We’re also able to respond quickly to design changes,” he says. “Once initial pods were placed on job sites, we asked for feedback so we could tweak the design and improve the product.”

After the initial units were deployed, some minor improvements were made. For example, Lendlease changed how the doorknob locked.

“We wanted them to lock from the inside for privacy, but we also wanted to unlock them from the outside without a special key, in case of an emergency,” says Clarke.

Another design change was a result of Covid-19. The first pods were produced before the pandemic and although they’re easier to clean and more hygienic than porta-johns, they didn’t directly address the possibility of viruses being present.

“So, for the next five pods, a broad spectrum UV light — which is known to kill viruses — was installed,” says Brown.

“The B&T team was able to incorporate that into the pod.”

Torpey explain that while the pods were in the factory, his team realized that the UV light wouldn’t run through its disinfecting cycle if someone didn’t close the door when they left the bathroom. “So we adjusted the closures so the door closes automatically when someone leaves. Easy.”

H3 pods are currently deployed on job sites in Chicago, New York, and San Francisco. Los Angeles will soon have some too.

“The reception has been overwhelming. I talked with a young woman who was working on the 27th floor of one of our projects,” says Clarke.

“In the past, she’d had to wait for the hoist to go all the way down to the 1st floor to use the women’s bathroom. Having one of these wellness pods available nearby changed everything for her.”

But it’s not only construction sites where the pods can make a difference. They have other applications.

“We’re remodelling our new manufacturing facility right now and the bathrooms were taken out, so we’re currently using a mock-up pod we created!” says Torpey.

“The feedback has been phenomenal. Every tradesperson says it’s really, really neat.”

Clarke adds, “The reception we’ve received from industries other than construction — such as entertainment venues — has also been remarkable.”

The pods are designed to be put near the top of a high-rise building under construction, where the necessary service risers are already in place. Although they can be craned in, they’re designed to fit into hoists and can be wheeled into place.

Similar to home bathrooms, the fixtures inside are porcelain — the toilet is flushable and the sink has hot running water. Along with a water heater, each unit includes a light, hand dryer, HVAC system, and motion sensors so the light turns off when the pod is unoccupied. (Other options like the UV light are add-ons.)

“The pod is hooked up to the sanitation riser on a construction site,” explains Clarke. “The waste can either go down to the sewer connection at street level or a temporary septic tank can be installed.”

The units are pre-wired with a 220-volt marine connection “like you’d use on a dock or in a campground” says Clarke.

Torpey compares connecting up the pods on a job site to hooking up an RV.

“Here in South Dakota, lots of us have RVs and they hook up really well when we pull up to a site. It’s really simple to connect an RV to power and water,” Torpey says.

“It’s the same concept for these bathroom pods. Everything is designed to be plug and play.”

“This is a paradigm shift for worker wellness,” says Clarke. Torpey agrees that the H3 pods are encouraging people to think differently about wellness on job sites, and in other contexts too such as at events and on transit. And it’s spurring related innovations.

“We’ve developed some entry tunnels that use facial recognition technology and take a temperature scan of each employee,” says Torpey. “We have a couple of those deployed on construction sites and we’ve had several rental companies express interest too.”

Looking further into the future, Brown has a vision that many construction workers would no doubt acknowledge is glorious. She says, “Eventually, the traditional porta-johns that you see on construction sites today will become a thing of the past.”